Scientists have discovered a spongy form of calcium carbonate (CaCO3), a material found in limestone, chalk, marble, and the shells of mussels and other shellfish. While most forms of calcium carbonate are hard minerals, this new form is soft and absorbent. The researchers, reporting November 5 in the journal Matter, made the discovery while exploring new uses for leftover mussel shells.

"The local aquaculture industry here on the east coast of Canada got in touch and told us they were going to start growing more mussels in the ocean and producing more waste, and they asked us if there could be some use for it," says senior author Francesca Kerton, a professor of chemistry at Memorial University Newfoundland. "I hadn't really thought about inorganic materials in nature, so it was really a desire to use a food waste product rather than mining or drilling for minerals."

While there are many industrial applications of calcium carbonate already, the research team discovered this spongey material by accident while exploring ways to make a less-corrosive de-icer for vehicles and roads. When they combined ground up mussel shells with acetic acid--the chemical found in vinegar--a strange, white spongey material emerged in the solution overnight.

"We thought somebody was playing a joke on us, putting bits of filter paper or something into the solution, because it didn't look like anything that we put in there," says Kerton. "So we scooped out some of the material and ran X-ray diffraction on it, and that told us it was calcite."

Calcite is one of several naturally occurring forms of calcium carbonate. The researchers concluded that the material was formed from extra calcium carbonate that didn't react completely with the acetic acid. They also tested how well the substance could absorb oils and dyes, wondering if it could have applications in marine pollution cleanup. While they found that it was highly absorbent, they have not yet found a practical way to produce enough of the material to be used for large-scale cleaning projects.

"We did think it was kind of neat that we could possibly take material from an organism that grows in the sea and treat pollution in the ocean," says Kerton. "The fact that we could absorb oil as well as other materials that have been used was pretty exciting, but the scalability and cost of making this sponge will limit that application."

So, while the researchers do not see this substance cleaning the ocean in the immediate future, that doesn't mean it's useless. The team now hopes to explore biomedical applications that would use much smaller amounts of the material.

"We've got lots of ideas for the future in terms of where it could be used. We're interested in whether it can take up drugs or active pharmaceutical ingredients or help control acid in the body," says Kerton. "Biological medicine might be the area where this is going to make the most impact."

The authors were supported by the Natural Sciences and Engineering Research Council of Canada, Memorial University, the Canada Foundation for Innovation, and the provincial government of Newfoundland and Labrador.

From hard to soft: making sponges from mussel shells 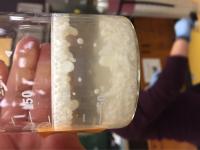