Just over a decade ago scientists pushed magnesium atoms to new limits, jamming extra neutrons into their nuclei toward - and possibly reaching - the maximum limit for this element.

Now, an international team led by scientists at the Department of Energy's Lawrence Berkeley National Laboratory (Berkeley Lab) has reproduced this exotic system, known as magnesium-40, and gleaned new and surprising clues about its nuclear structure.

"Magnesium-40 sits at an intersection where there are a lot of questions about what it really looks like," said Heather Crawford, a staff scientist in the Nuclear Science Division at Berkeley Lab and lead author of this study, published online Feb. 7 in the Physical Review Letters journal. "It's an extremely exotic species."

Atoms of the same element with different neutron counts are known as isotopes. The magnesium-40 (Mg-40) isotope that the researchers studied has 28 neutrons, which may be the maximum for magnesium atoms. For a given element, the maximum number of neutrons in a nucleus is referred to as the "neutron drip line" - if you try to add another neutron when it is already at capacity, the extra neutron will immediately "drip" out of the nucleus.

"It's extremely neutron-rich," Crawford said. "It's not known if Mg-40 is at the drip line, but it's surely very close. This is one of the heaviest isotopes that you can currently reach experimentally near the drip line."

The shape and structure of nuclei near the drip line is particularly interesting to nuclear physicists because it can teach them fundamental things about how nuclei behave at the extremes of existence.

"The interesting question in our minds all along, when you get so close to the drip line, is: 'Does the way that the neutrons and protons arrange themselves change?'" said Paul Fallon, a senior scientist in Berkeley Lab's Nuclear Science Division and a co-author of the study. "One of the major goals of the nuclear physics field is to understand the structure from the nucleus of an element all the way to the drip line."

Such a fundamental understanding can inform theories about explosive processes such as the creation of heavy elements in star mergers and explosions, he said.

The study is based on experiments at Japan's Radioactive Isotope Beam Factory (RIBF), which is located at the RIKEN Nishina Center for Accelerator-Based Science in Wako, Japan. Researchers combined the power of three cyclotrons - a type of particle accelerator first developed by Berkeley Lab founder Ernest Lawrence in 1931 - to produce very-high-energy particle beams traveling at about 60 percent of the speed of light.

The research team used a powerful beam of calcium-48, which is a stable isotope of calcium with a magic number of both protons (20) and neutrons (28), to strike a rotating disk of several-millimeters-thick carbon.

Some of the calcium-48 nuclei crashed into the carbon nuclei, in some cases producing an aluminum isotope known as aluminum-41. The nuclear physics experiment separated out these aluminum-41 atoms, which were then channeled to strike a centimeters-thick plastic (CH2) target. The impact with this secondary target knocked a proton away from some of the aluminum-41 nuclei, creating Mg-40 nuclei.

This second target was surrounded by a gamma-ray detector, and researchers were able to investigate excited states of Mg-40 based on the measurements of the gamma rays emitted in the beam-target interactions.

In addition to Mg-40, the measurements also captured the energies of excited states in other magnesium isotopes, including Mg-36 and Mg-38.

"Most models said that Mg-40 should look very similar to the lighter isotopes," Crawford said. "But it didn't. When we see something that looks very different, then the challenge is for new theories to capture all of this."

Because the theories now disagree with what was seen in the experiments, new calculations are needed to explain what is changing in the structure of Mg-40 nuclei compared to Mg-38 and other isotopes.

Fallon said that many calculations suggest that Mg-40 nuclei are very deformed, and possibly football-shaped, so the two added neutrons in Mg-40 may be buzzing around the core to form a so-called halo nucleus rather than being incorporated into the shape exhibited by neighboring magnesium isotopes.

"We speculate on some of the physics, but this has to be confirmed by more detailed calculations," he said.

Crawford said that additional measurements and theory work on Mg-40, and that nearby isotopes could help to positively identify the shape of the Mg-40 nucleus, and to explain what is causing the change in nuclear structure.

Researchers noted that the nuclear physics Facility for Rare Isotope Beams, a new DOE Office of Science User Facility that is under construction at Michigan State University, combined with the Gamma-Ray Energy Tracking Array (GRETA) being built at Berkeley Lab, will enable further studies of other elements near the nuclear drip line.

Researchers at RIKEN's Nishina Center and the RIKEN campus in Saitama, Osaka University, the University of Tokyo, and the Tokyo Institute of Technology in Japan; Saint Mary's University and TRIUMF in Canada; the Institute of Nuclear Physics in France; the University of York in the U.K.; and the GSI Helmholtz Center for Heavy-Ion Research in Germany also participated in the study.

This work was supported by the U.S. Department of Energy's Office of Science, the Royal Society, and the U.K. Science and Technology Facilities Council. 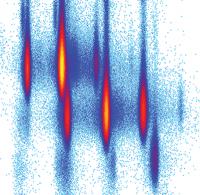