When paleontologists put together a life history for a long-extinct animal, it's common to infer the foods it ate by looking at modern animals with similar skull shapes and tooth patterns. But this practice is far from foolproof. New modeling and tests based on living species done at the American Museum of Natural History show that the link between animal diets and skull biomechanics is complex, with a stronger influence from ancestry than previously thought.

"Traditionally, when we looked at a fossilized skull with pointy piercing teeth and sharp slicing blades, we assumed that it was primarily a meat eater, but that simplistic line of thinking doesn't always hold true," said John J. Flynn, the Museum's Frick Curator of Fossil Mammals and a co-author on the new work published today in the journal PLOS ONE. "We've found that diet can be linked to a number of factors--skull size, biomechanical attributes, and often, most importantly, the species' position in the tree of life."

Flynn and Z. Jack Tseng, a National Science Foundation and Frick Postdoctoral Fellow in the Museum's Division of Paleontology, looked at the relationship between skull shape and function of five different modern carnivore species, including meat-eating "hypercarnivore" specialists such as wolves and leopards, and more omnivorous "generalists" such as mongooses, skunks, and raccoons. The initial modeling, which mapped bite force against the stiffness of the animal's skull, yielded a surprise.

"Animals with the same diets and biomechanical demands, like wolves and leopards--both hypercarnivores--were not linking together," Tseng said. "Instead, we saw a strong signal driven mostly by ancestry, where, for example, the leopard and the mongoose bind together because they're more closely related in an evolutionary context, although they have very different dietary preferences and feeding strategies."

But once Tseng and Flynn accounted for the strong effects of ancestry and skull size on the models, hypercarnivores and generalists still could be distinguished based on biomechanics, in particular by looking at where along the tooth row the skull is strongest. Meat specialist skulls are stiffest when hunting with front teeth and/or slicing or crushing with back teeth, whereas skulls of generalists show incrementally increasing stiffness when biting sequentially from the front to the back of the tooth row.

The researchers then applied this improved shape-function computer model to two extinct species: Thinocyon velox, a predatory mammal that was part of the now-extinct Creodont group, and Oodectes herpestoides, an early fossil predecessor of modern carnivores,. They found that T. velox likely had a unique hypercarnivorous feeding style that allowed for skull strength at two places: prey capture with its front teeth and powerful slicing and crushing with its back teeth. The biomechanical profile of O. herpestoides, meanwhile, suggests that it was a generalist, but compared to living relatives of similar body size, it might have fed on smaller prey because of its weaker skull.

"Beyond feeding adaptations of extinct species, we also want to decipher how adaptations evolved using reconstructed ancestors of living and fossil forms," Tseng said. "We are applying similar types of skull shape and biomechanical analyses to reconstructed hypothetical ancestor skulls of Carnivora and their relatives to map out and better understand the long history of feeding adaptation of living top predators."

This work was funded by National Science Foundation Grant #DEB-1257572 and an AMNH Frick Postdoctoral Fellowship.

Can skull shape and function determine what kind of food was on prehistoric plates? 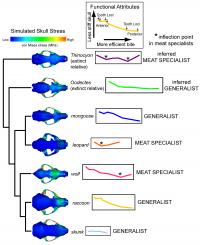