In the fall, eastern North American monarch butterflies take the biggest trip of their lives to their wintering grounds in Mexico. The butterflies are genetically hardwired to fly southwest mainly using a time-compensated sun compass, which combines the time of day and the position of the sun to navigate. To understand how this information connects in the butterfly brain, researchers reporting April 14 in Cell Reports created a mathematical model that can reproduce the animals' internal calculations.

"The monarchs use a sun compass for migration, but the sun's position is not sufficient to determine the right direction. They need to combine that information with the time of day to know where to go," says Eli Shlizerman, an applied mathematician at the University of Washington.

But, says Steven Reppert, a neuroscientist at the University of Massachusetts Medical School, "We still don't understand how the clock and sun compass talk to each other in a way that leads to oriented flight behavior. From a neurobiological perspective, it was a major question."

To start examining the process, Shlizerman and Daniel Forger, an applied mathematician at the University of Michigan, built a series of equations to model the butterflies' neural activity. After estimating the firing rates from neurons in the antennae and eyes, Shizerman and Forger extrapolated how such neurons might interact with each other in a simplified model. Then, they built equations that would indicate whether a given flight angle was correct or if the butterfly needed to steer left or right in order to face southwest.

The final model predicted the real-life behaviors of butterflies orienting themselves in a flight simulator at different times of day. "We looked carefully at a lot of different types of behaviors that you see in monarch butterfly flight, and the model was able to reproduce them," says Forger. "It was exciting."

One of the main findings from the model was the existence of a "separatrix angle," which changes position throughout the day and marks the point where a butterfly has to do a full rotation to re-orient itself. If this angle is narrow, close to the sun, then even a small disturbance to the butterfly's flight path might cause it to spin around multiple times before facing southwest again. But if the angle is wide, with the rotation point directly opposite the sun, the butterfly can efficiently steer left or right to correct its flight path with only minor shifts.

"The biggest thing we need to do now is define, in biological terms, what the model describes. We can use its parameters to help us dissect the circuitry involved in monarch navigation," says Reppert. "What this emphasizes is that these are not just pretty animals. They are a biological treasure trove."

Funding was provided grants from the National Institutes of Health, the National Science Foundation, the Air Force Office of Scientific Research, and the Washington Research Foundation Fund. 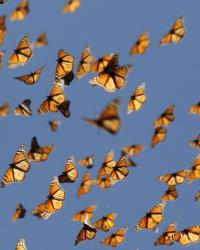 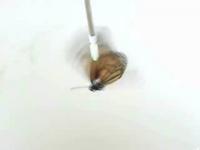