Neuroscientists have discovered a specific enzyme that plays a critical role in spinal muscular atrophy, and that suppressing this enzyme's activity, could markedly reduce the disease's severity and improve patients' lifestyles.

Spinal muscular atrophy is a debilitating disease that causes weakness and wasting of the muscles. The disease ranges in severity with patients experiencing different symptoms, from the inability to sit up and stand, to trouble walking. In its severest form, the disease results in difficulty breathing and leads to death.

In a recent study published in the December 15th issue of Human Molecular Genetics, Dr. Gangwani and his team of researchers at TTUHSC El Paso describe how mice with spinal muscular atrophy saw great improvement when the JNK3 enzyme was genetically inhibited to eliminate its activity. The finding suggests that patients with spinal muscular atrophy could also see improvement if treated with a drug that suppresses the activity of JNK3.

Spinal muscular atrophy is caused by a genetic mutation that triggers the loss of spinal cord motor neurons -- neurons that help control the body's movements. As the neurons deteriorate, so does one's ability to control their own movement.

This same study, however, found that inhibiting JNK3 in mice prevented the loss of motor neurons, which is particularly important to prevent progression of disease, says Gangwani.

"So far, spinal muscular atrophy research has focused on targeting the genetic mutation to prevent degeneration of spinal motor neurons, but it hasn't been successful because of challenges associated with gene therapy," he says. "This is the first study done that identifies a target, JNK3, that's independent of the genetic mutation of spinal muscular atrophy for novel therapeutic development."

The TTUHSC El Paso research team now plans to test pharmacological compounds that can inhibit JNK3 in mice to identify drug compounds that will slow the progression of the disease and reduce the overall burden of this illness in patients. They've also decided to patent their idea of using a JNK3 inhibitor to treat spinal muscular atrophy. 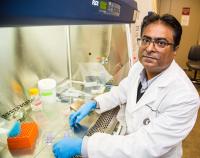