Melbourne researchers are making progress towards new antimalarial drugs, after revealing how an antibiotic called emetine blocks the molecular machinery that produces the proteins required for malaria parasite survival.

Although emetine is effective against malaria it is not used as a preventive drug due to its significant side effects. However, the work of Walter and Eliza Hall Institute researchers Dr Wilson Wong, Dr Jake Baum and colleagues in showing how emetine attaches to and blocks the molecular machinery that makes the proteins required for malaria parasite survival has revealed new approaches for antimalarial drug development.

Their study, involving collaborators led by Dr Sjors Scheres from the MRC Laboratory of Molecular Biology in Cambridge, UK and the Bio21 Institute in Melbourne was published in the journal eLife.

Malaria infects hundreds of millions of people worldwide every year and causes more than 600,000 deaths. The Plasmodium malaria parasite has developed resistance to current antimalarial drugs, making them less effective and new drugs are needed urgently.

Dr Wong said the study examined the parasite cell's protein-making machinery, called the ribosome, visualising for the first time the structure of this 'protein complex' in the malaria parasite. "The ribosome is responsible for constructing all proteins inside the cell, based on the DNA 'blueprint'," he said. "Antibiotics such as emetine kill the malaria parasite by binding to its ribosome and preventing the parasite from building the proteins it needs to produce energy, grow, reproduce and evade the immune system."

Dr Wong said knowledge of emetine and related antibiotics such as pactamycin could be used as the basis for developing new antimalarial drugs.

"Our structure is an exciting discovery as it gives a clear path forward in developing new drugs to tackle this deadly disease. We have found features of the parasitic ribosome that are not found in the human form. Drug makers could exploit these features in order to specifically target the production of proteins within the malaria parasite," Dr Wong said.

"We are now working with our colleagues from the institute's ACRF Chemical Biology division to develop new molecules based on emetine and pactamycin. Knowing exactly how these antibiotics work will enable development of new antimalarial drugs that replicate the active component of these antibiotics while changing the parts that make it toxic to patients," Dr Wong said. Dr Jake Baum, now at the Imperial College of London, UK, said the study used a new imaging technique called cryo-electron microscopy (cryo-EM) to create the structure of the malaria parasite's ribosome.

"Cryo-EM is an exciting technique that allows us to visualise the structure of protein complexes directly from cellular material, instead of having to crystallise them which is often difficult to do and requires huge amounts of material," Dr Baum said. "Working with our colleagues at the MRC Laboratory of Molecular Biology in Cambridge, UK, the images of the parasite ribosome revealed how emetine binds to the ribosome, stopping it from reading the 'recipe' for malaria proteins. Now we can use this knowledge to design better forms of emetine that could be used to tackle malaria." 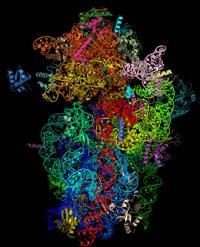