HOUSTON -- (June 22, 2020) -- Rice University engineers have created a light-powered catalyst that can break the strong chemical bonds in fluorocarbons, a group of synthetic materials that includes persistent environmental pollutants.

In a study published this month in Nature Catalysis, Rice nanophotonics pioneer Naomi Halas and collaborators at the University of California, Santa Barbara (UCSB) and Princeton University showed that tiny spheres of aluminum dotted with specks of palladium could break carbon-fluorine (C-F) bonds via a catalytic process known as hydrodefluorination in which a fluorine atom is replaced by an atom of hydrogen.

The strength and stability of C-F bonds are behind some of the 20th century's most recognizable chemical brands, including Teflon, Freon and Scotchgard. But the strength of those bonds can be problematic when fluorocarbons get into the air, soil and water. Chlorofluorocarbons, or CFCs, for example, were banned by international treaty in the 1980s after they were found to be destroying Earth's protective ozone layer, and other fluorocarbons were on the list of "forever chemicals" targeted by a 2001 treaty.

"The hardest part about remediating any of the fluorine-containing compounds is breaking the C-F bond; it requires a lot of energy," said Halas, an engineer and chemist whose Laboratory for Nanophotonics (LANP) specializes in creating and studying nanoparticles that interact with light.

Over the past five years, Halas and colleagues have pioneered methods for making "antenna-reactor" catalysts that spur or speed up chemical reactions. While catalysts are widely used in industry, they are typically used in energy-intensive processes that require high temperature, high pressure or both. For example, a mesh of catalytic material is inserted into a high-pressure vessel at a chemical plant, and natural gas or another fossil fuel is burned to heat the gas or liquid that's flowed through the mesh. LANP's antenna-reactors dramatically improve energy efficiency by capturing light energy and inserting it directly at the point of the catalytic reaction.

In the Nature Catalysis study, the energy-capturing antenna is an aluminum particle smaller than a living cell, and the reactors are islands of palladium scattered across the aluminum surface. The energy-saving feature of antenna-reactor catalysts is perhaps best illustrated by another of Halas' previous successes: solar steam. In 2012, her team showed its energy-harvesting particles could instantly vaporize water molecules near their surface, meaning Halas and colleagues could make steam without boiling water. To drive home the point, they showed they could make steam from ice-cold water.

The antenna-reactor catalyst design allows Halas' team to mix and match metals that are best suited for capturing light and catalyzing reactions in a particular context. The work is part of the green chemistry movement toward cleaner, more efficient chemical processes, and LANP has previously demonstrated catalysts for producing ethylene and syngas and for splitting ammonia to produce hydrogen fuel.

Study lead author Hossein Robatjazi, a Beckman Postdoctoral Fellow at UCSB who earned his Ph.D. from Rice in 2019, conducted the bulk of the research during his graduate studies in Halas' lab. He said the project also shows the importance of interdisciplinary collaboration.

"I finished the experiments last year, but our experimental results had some interesting features, changes to the reaction kinetics under illumination, that raised an important but interesting question: What role does light play to promote the C-F breaking chemistry?" he said.

The answers came after Robatjazi arrived for his postdoctoral experience at UCSB. He was tasked with developing a microkinetics model, and a combination of insights from the model and from theoretical calculations performed by collaborators at Princeton helped explain the puzzling results.

"With this model, we used the perspective from surface science in traditional catalysis to uniquely link the experimental results to changes to the reaction pathway and reactivity under the light," he said.

The demonstration experiments on fluoromethane could be just the beginning for the C-F breaking catalyst.

"This general reaction may be useful for remediating many other types of fluorinated molecules," Halas said.

Halas is the Stanley C. Moore Professor of Electrical and Computer Engineering in Rice's Brown School of Engineering, director of Rice's Smalley-Curl Institute and a professor of chemistry, bioengineering, physics and astronomy, and materials science and nanoengineering.

https://news-network.rice.edu/news/files/2020/01/0108_SYNGAS-nh30-lg.jpg
CAPTION: Rice University's Naomi Halas is an engineer, chemist and pioneer in the field of light-activated nanomaterials. (Photo by Jeff Fitlow/Rice University)

Fluorocarbon bonds are no match for light-powered nanocatalyst 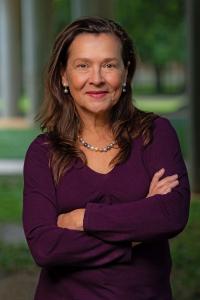