Growing more climbing beans, as opposed to lower-yield bush beans, could help increase food security in sub-Saharan Africa as demand for food increases, climate change becomes more pronounced, and arable land becomes scarcer, according to a new study. Researchers mapped suitable cultivation areas and modeled future scenarios for 14 countries. The results indicate where specialists can target to promote climbing bean cultivation in areas that are highly suitable for the crop and not yet cultivated.

"Climate change is making it more difficult for Africa to produce food," said Glenn Hyman, a co-author and environmental scientist at Spatial Informatics Group. "Yields are expected to go down. We're proposing climbing beans as an intensification solution, mostly because they yield three times more than bush beans."

Varieties of the common bean, Phaseolus vulgaris, are essential for nutrition and income for millions in sub-Saharan Africa. Sustaining the growing export trade while satisfying domestic demand will require a substantial increase in yield from existing cropland. But expansion to new lands is no longer feasible in most countries.

The research was published in January in Mitigation and Adaptation Strategies for Global Change. Co-authors included scientists from the Alliance of Bioversity International and the International Center for Tropical Agriculture (CIAT), and Colombia's Universidad del Valle.

Though experts predict that higher temperatures and less rainfall will make many areas inhospitable even for climbing beans, they argue there are still places that will become more suitable for the variety. These regions may produce little of it at the moment, but their future climate and soil conditions offer great opportunities to boost their yields.

To identify these areas, researchers used models to project the future geographic distribution of beans and overlapped them with their present ranges. "We compared the current distribution of climbing beans with their suitability for the land and climate. There are some places with good conditions to grow the bean, but with no current production," said Hyman.

Models suggest climbing beans can now find suitable hotspots in the Great African Lakes region, and parts of Ethiopia, Cameroon, and Zimbabwe, while Rwanda will become increasingly fit for the crop. But in the future, over half of the countries in the study will become less suitable, with major changes across southern Africa, in Zambia, Zimbabwe, Mozambique, Malawi, and the southern part of Tanzania.

Climbing beans can adapt to Africa's future climates in several ways, say the authors. One would be farmers intensifying cultivation in high-producing areas that will remain fit under future climate change. Another would be to start expanding crops to areas where rainfall, temperatures and soils will meet the crop's needs in the future.

The stalks are high

By 2030, higher temperatures and more frequent droughts might cut common bean production by 3-5 percent across Africa, undermining the continent's capacity to meet its needs for the legume. Beans lie at the core of East Africans' diet, providing important balancing nutrients, such as proteins and minerals. As booming populations and urbanizations drive up bean demand, sub-Saharan Africa needs to boost its bean yields, yet experts say that most countries cannot further expand their crops.

Climbing beans might help not only Africa, but also other regions growing beans in similar conditions - such as Central America and the Andes, especially with the incorporation of heat- and drought-tolerant varieties. This should happen in tandem with improving common bean varieties to cope with climate change and intensifying production where the land allows, as part of bigger adaptation efforts. 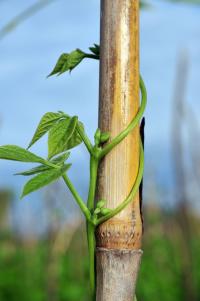