Orlando, Fla. (April 6, 2019) - Despite decades of fascination with dolphins, scientists have long overlooked one aspect of the species' anatomy. For the first time, researchers offer an up-close look at the clitoris of female dolphins along with insights on the potential for the animals to experience sexual pleasure.

The scientists discovered that female bottlenose dolphins have large and well-developed clitorises. The structure of the tissue suggests the clitoris may expand, for example, in response to stimulation. The skin under the clitoral hood contains bundles of nerves that may increase sensitivity and the potential for pleasure, as has been found in the human clitoris.

Previous studies suggest sex plays an important role in social bonding among dolphins, as seen in other social species. Dolphins copulate year-round, including during periods when they cannot conceive.

"In other mammalian species with year-round copulation, such as humans and bonobos, sex is known to be pleasurable for females, often through clitoral stimulation that leads to orgasm," said Dara Orbach, PhD, research associate at Mount Holyoke College, who conducted the research along with Assistant Professor of Biology Patricia Brennan, PhD. "Our anatomical observations suggest the clitoris is functional in bottlenose dolphins, but further research, including physiological and behavioral analyses, are necessary to test if sexual experiences can be pleasurable for female dolphins."

Orbach will present the research at the American Association of Anatomists annual meeting during the 2019 Experimental Biology meeting, held April 6-9 in Orlando, Fla.

The researchers studied 11 dolphins that had died naturally and were collected under a permit authorized by the National Marine Fisheries Service. To explore the anatomy of the dolphin clitoris, they performed dissections, created 3-D computed tomography (CT) scans, fixed the tissues in paraffin wax and stained them to examine their structure in detail.

In another contrast with human anatomy, the researchers did not find in the bottlenose dolphins any evidence of a vestibular bulb, an area of erectile tissue that surrounds the vaginal opening in humans and contributes to orgasm.

"Very little is known about female reproductive morphology in most wild vertebrate species," said Orbach. "This research provides a comparative framework to explore other functions of sex that may not be unique to humans. We are on the precipice of a deeper understanding of the relationship between form and function of genitalia."

Dara Orbach will present this research on Saturday, April 6, from 11:15-11:30 a.m. in Room W208A, Orange County Convention Center (abstract). Contact the media team for more information or to obtain a free press pass to attend the meeting.

New insights on the form and function of the dolphin clitoris 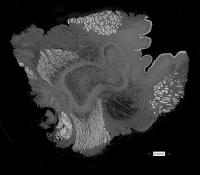