Ice Age climate records from an Arizona stalagmite link the Southwest's winter precipitation to temperatures in the North Atlantic, according to new research.

The finding is the first to document that the abrupt changes in Ice Age climate known from Greenland also occurred in the southwestern U.S., said co-author Julia E. Cole of the University of Arizona in Tucson.

The researchers tapped into the natural climate archives recorded in a stalagmite from a limestone cave in southern Arizona. Stalagmites grow up from cave floors.

The stalagmite yielded an almost continuous, century-by-century climate record spanning 55,000 to 11,000 years ago. During that time ice sheets covered much of North America, and the Southwest was cooler and wetter than it is now.

Cole and her colleagues found the Southwest flip-flopped between wet and dry periods during the period studied.

Each climate regime lasted from a few hundred years to more than one thousand years, she said. In many cases, the transition from wet to dry or vice versa took less than 200 years.

"These changes are part of a global pattern of abrupt changes that were first documented in Greenland ice cores," she said. "No one had documented those changes in the Southwest before."

Scientists suggest that changes in the northern Atlantic Ocean's circulation drove the changes in Greenland's Ice Age climate, Cole said. "Those changes resulted in atmospheric changes that pushed around the Southwest's climate."

She added that observations from the 20th and 21st centuries link modern-day alterations in the North Atlantic's temperature with changes in the storm track that controls the Southwest's winter precipitation.

"Also, changes in the storm track are the kinds of changes we expect to see in a warming world," she said. "When you warm the North Atlantic, you move the storm track north."

Cole became interested in studying cave formations as natural climate archives about 10 years ago. At the suggestion of some local cave specialists, she and her students began working in the Cave of the Bells, an active limestone cave in the Santa Rita Mountains.

In such a cave, mineral-rich water percolates through the soil into the cave below and onto its floor. As the water loses carbon dioxide, the mineral known as calcium carbonate is left behind. As the calcium carbonate accumulates in the same spot on the cave floor over thousands of years, it forms a stalagmite.

The researchers chose the particular stalagmite for study because it was deep enough in the cave that the humidity was always high, an important condition for preservation of climate records, Cole said. Following established cave conservation protocols, the researchers removed the formation, which was less than 18 inches tall.

For laboratory analyses, first author Wagner took a core about one inch in diameter from the center of the stalagmite. The scientists then returned the formation to the cave, glued it back into its previous location with special epoxy and capped it with a limestone plug.

To read the climate record preserved in the stalagmite, Wagner sliced the core lengthwise several times for several different analyses.

On one slice, she shaved more than 1,200 hair-thin, 100-micron samples and measured what types of oxygen molecule each one contained.

A rare form of oxygen, oxygen-18, is more common in the calcium carbonate deposited during dry years. By seeing how much oxygen-18 was present in each layer, the scientists could reconstruct the region's pattern of wet and dry climate.

To assign dates to each wet and dry period, Wagner used another slice of the core for an analysis called uranium-thorium dating.

The radioactive element uranium is present in minute amounts in the water dripping onto a stalagmite. The uranium then becomes part of the formation. Uranium decays into the element thorium at a steady and known rate, so its decay rate can be used to construct a timeline of a stalagmite's growth.

By matching the stalagmite's growth timeline with the sequence of wet and dry periods revealed by the oxygen analyses, the researchers could tell in century-by-century detail when the Southwest was wet and when it was dry.

"This work shows the promise of caves to providing climate records for the Southwest. It's a new kind of climate record for this region," Cole said.

She and her colleagues are now expanding their efforts by sampling other cave formations in the region.

The National Science Foundation, the Geological Society of America and the University of Arizona's Faculty Small Grant program funded the research. 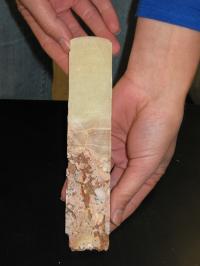