A remote monitoring tool to help authorities manage public safety and environmental issues in recently abandoned coal mines has been developed by the University of Nottingham.

The tool uses satellite radar imagery to capture millimetre-scale measurements of changes in terrain height. Such measurements can be used to monitor and forecast groundwater levels and changes in geological conditions deep below the earth's surface in former mining areas.

With a long history of coal mining, the project was tested in the UK at a regional scale, but has global implications given the worldwide decline in the demand for coal in favour of more sustainable energy sources.

The method was implemented over the Nottinghamshire coalfields, which were abandoned as recently as 2015, when the last deep mine, Thoresby Colliery, shut its doors for good.

When deep mines are closed, the groundwater that was previously pumped to the surface to make mining safe, is allowed to rise again until it is restored to its natural level in a process called rebound.

The rebound of groundwater through former mine workings needs careful monitoring; often containing contaminants it can pollute waterways and drinking water supplies; lead to localised flooding; renew mining subsidence, land uplift and reactivate geological faults if it rises too fast. Such issues can cause costly and hazardous problems that need to be addressed prior to the land being repurposed.

The Coal Authority therefore needs detailed information on the rebound rate across the vast mine systems it manages so it knows exactly where to relax or increase pumping to control groundwater levels.

Measuring the rate and location of mine water rebound is therefore vital to effectively manage the environmental and safety risks in former coalfields, but difficult to achieve. Groundwater can flow in unanticipated directions via cavities within and between neighbouring collieries and discharge at the surface in areas not thought to be at risk.

In the past, predicting where mine water will flow was heavily-reliant on mine plans; inaccurate or incomplete documents that are sometimes more than a century old; and borehole data. Costing approximately £20,000 to £350K each, boreholes are expensive to drill and are often sparsely situated across vast coalfields, leaving measurement gaps.

More recently uplift, subsidence and other geological motion has been monitored by applying Interferometric Synthetic Aperture Radar (InSAR) to images acquired from radar satellites. However, this interferometry technique has historically worked only in urban areas (as opposed to rural ones), where the radar can pick up stable objects, such as buildings or rail tracks, on the ground to reflect back regularly to the satellite.

This study uses an advanced InSAR technique, called Intermittent Small Baseline Subset (ISBAS), developed by the University of Nottingham and its spin-out company Terra Motion Ltd. InSAR uses stacks of satellite images of the same location taken every few days or weeks which makes it possible to pick up even the slightest topographical changes over time. Uniquely, ISBAS InSAR can compute land deformation measurements over both urban and rural terrain. This is beneficial when mapping former mining areas, which are often located in rural areas. Over the Nottinghamshire coalfields, for example, the land cover is predominantly rural, with nearly 80 per cent comprising agricultural land, pastures and semi-natural areas.

Such a density of measurements meant study lead, University of Nottingham PhD student David Gee could develop a cost-effective and simple method to model groundwater rebound from the surface movement changes.

The study found a definitive link between ground motion measurements and rising mine water levels. Often land subsidence or uplift occurs as a result of changes in groundwater, where the strata acts a little like a sponge, expanding when filling with fluid and contracting when drained.

With near-complete spatial coverage of the InSAR data, he could fill in the measurement gaps between boreholes to map the change in mine water levels across the whole coalfield. The model takes into account both geology and depth of groundwater to determine the true rate of rebound and help identify where problems associated with rebound may occur.

The findings have been published in a paper 'Modelling groundwater rebound in recently abandoned coalfields using DInSAR' in the journal Remote Sensing of Environment.

David Gee, who is based in the Nottingham Geospatial Institute at the University, said, "There are several coalfields currently undergoing mine water rebound in the UK, where surface uplift has been measured using InSAR. In the Nottinghamshire coalfields, the quantitative comparison between the deformation measured by the model and InSAR confirms that the heave is caused by the recovery of mine water."

At first a forward model was generated to estimate surface uplift in response to measured changes in groundwater levels from monitoring boreholes. David calibrated and validated the model using ISBAS InSAR on ENVISAT and Sentinel-1 radar data. He then inverted the InSAR measurements to provide an estimate of the change in groundwater levels. Subsequently, the inverted rates were used to estimate the time it will take for groundwater to rebound and identify areas of the coalfield most at risk of surface discharges.

"InSAR measurements, when combined with modelling, can assist with the characterisation of the hydrogeological processes occurring at former mining sites. The technique has the potential to make a significant contribution to the progressive abandonment strategy of recently closed coalfields," David said.

The InSAR findings offer a supplementary source of data on groundwater changes that augment the borehole measurements. It means monitoring can be done remotely so is less labour-intensive for national bodies such as the Environment Agency (which manages hazards such as flooding, pollution and contaminated land) and the Coal Authority (which has a mandate to manage the legacy of underground coal mining in terms of public safety and subsidence).

The model has already flagged that some parts of the coal fields that are not behaving as previously predicted, which could influence existing remediation plans.

David explains, "The deepest part of the North Nottinghamshire coalfield, for example, is not rebounding as expected which suggests that the mine plans here might not be completely accurate. The stability is confirmed by the InSAR and the model - future monitoring of this area will help to identify if or when rebound does eventually occur.

"Next steps for the project are to integrate our results into an existing screening tool developed by the Environment Agency and Coal Authority to help local planning authorities, developers and consultants design sustainable drainage systems in coalfield areas. The initial results, generated at a regional scale, have the potential to be scaled to all coalfields in the UK, with the aid of national InSAR maps," adds David.

Luke Bateson, Senior Remote Sensing Geologist from the British Geological Survey, said, "InSAR data offers a fantastic opportunity to reveal how the ground is moving, however we need studies such as David's in order to understand what these ground motions relate to and what they mean. David's study, not only provides this understanding but also provides a tool which can convert InSAR ground motions into information on mine water levels that can be used to make informed decisions."

Dr Andrew Sowter, Chief Technical Officer at Terra Motion Ltd, explains, "Studies like this demonstrate the value to us, as a small commercial company, in investing in collaborative work with the University. We now have a remarkable, validated, result that is based upon our ISBAS InSAR method and demonstrably supported by a range of important stakeholders. This will enable us to further penetrate the market in a huge range of critical applications hitherto labelled as difficult for more conventional InSAR techniques, particularly those markets relating to underground fluid extraction and injection in more temperate, vegetated zones." 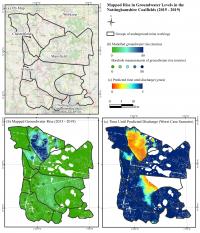 David Gee working on the model