UNIVERSITY PARK, Pa. -- The virus that causes barley yellow dwarf, the most widespread disease of cereal crops, manipulates its host plant and insect vector to promote its own survival, according to an international team of researchers. The group found that the virus raises the temperature of its host plants along with the heat-tolerance of its aphid vectors to create regions on the plants where aphids can feed free from competing insects. The findings could have implications for crop health as the global climate warms.

"The effects of viruses on the thermal biology of vectors may be of particular interest in light of global climate," said Mitzy Porras, postdoctoral scholar, Penn State. "Some species may be more successful under warming conditions, and this raises urgent questions about which insect vectors will cope and how they will impact ecological communities and our food crops."

The findings appeared on March 4 in Nature Communications.

Looking more closely at the thermal tolerances of each of the aphid species, the scientists placed the insects, both with and without viruses, onto a critical temperature maxima setup and slowly increased the temperature until the aphids stopped moving. They recorded the maximum temperature as the point when the aphids turned upside down and could no longer return to an upright position. Afterward, they returned the aphids to their plants to recover. They found that when R. padi was infected with the virus it tolerated higher temperatures than it did without the virus, and it also tolerated higher temperatures than R. maidis.

"This enhanced thermal tolerance -- which was associated with higher expression of three heat-shock protein genes -- allowed aphids to occupy the higher and warmer regions of infected host plants when displaced from cooler plant regions by competition with the larger aphid species, R. maidis," said Edwin Rajotte, professor of entomology. "In other words, the virus increased the vector's fitness, along with its own chances of being acquired and transmitted to new host plants."

"Considering all of this data together, we show for the first time that a virus infection can increase both the host plant's temperature and the vector's heat tolerance, and that these changes allow certain aphids to occupy higher and warmer regions of infected host plants when displaced from cooler regions by competition with the larger aphid species," said Porras.

The U.S. Department of Agriculture National's Institute of Food and Agriculture supported this research. 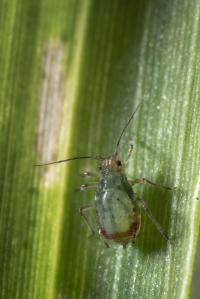