Neurons1 and astrocytes2 are prominent cell types in the cerebral cortex. Neurons are the primary information processing cells in the brain, whereas astrocytes support and modulate their functions. For sound functioning of the brain, it is crucial that proper numbers of neurons and astrocytes are generated during fetal brain development. The brain could not function correctly if only neurons or astrocytes were generated.

The research group at Kanazawa University show that the switch determining the fate of two types of cells in the cerebral cortex generated from neural stem cells is based on the FGF signaling pathway (Figure 1). More specifically, it was found that enhancement of FGF signaling by introducing FGF in the cerebral cortex caused cells destined to become neurons to be differentiated into astrocytes (Figures 2, 3). On the other hand, suppression of FGF signaling caused cells destined to become astrocytes to be differentiated into neurons (Figure 3). The present study has thus elucidated the mechanism responsible for determining the correct numbers of neurons and astrocytes during development of the fetal brain.

The research group has discovered the switch that determines the fate of cells in the developing cerebral cortex generated from neural stem cells, i.e. neurons and astrocytes; this switch involves the FGF signaling pathway. This may be relevant for understanding the pathology of brain disorders caused by unbalanced numbers of neurons and astrocytes by determining which disorders are based on abnormal FGF signaling.

Neurons are the cells that primarily perform information processing in the brain. When neuronal functions are impaired, e.g. in various diseases, brain functions deteriorate, resulting in various symptoms such as memory decline and other neurological and behavioral disorders.

Cells other than neurons in the brain are collectively called glial cells. A major type of glial cell is the astrocyte or astroglia, so-called due to their star-like shape. Astrocytes are known to support neurons by supplying nutrients, removal of metabolic wastes, as well as modulating their electrical activity.

Fibroblast growth factor (FGF) is a protein signaling molecule. FGF has been known to have functions such as stimulating cell proliferation (division) and supporting cell survival. The present study has revealed a new function for FGF in determining the fate of new cells in the cerebral cortex from neural stem cells: from neurons to astrocytes. 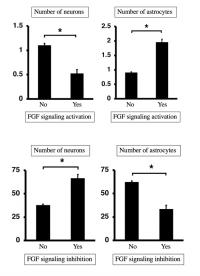 Figure 3: Changes in Cell Numbers of Neurons and Astrocytes in Response to the Change of FGF Signali