When researchers studying several bird-pollinated species of Impatiens flowers in the mountains of western Cameroon noticed one with an odd, upwardly curving nectar spur, they couldn't imagine how any sunbird could ever sip from it. After recording visitors to the flower continuously for a period of days, they had their answer, which they report in the Cell Press journal Current Biology on September 8.

When sunbirds insert their beaks into those funny-shaped spurs, the flowers do a little twist. That apparently small modification significantly affects how pollen is placed on the birds' bodies, increasing the likelihood that the pollen will successfully land on the stigma of another member of the same flower species to produce the next generation of Impatiens frithii.

The observation offers the first evidence of a pollination system in which plants have overcome floral architecture constraints on pollen placement by twisting their nectar spurs, according to the researchers. It is also an example of how evolution sometimes comes up with elegant and unexpected solutions, they say.

"When we saw the recordings from the cameras, we were really excited," says Michael Bartoš of the Institute of Botany at the Academy of Sciences of the Czech Republic, noting that the twisting action happens so quickly it is almost imperceptible to a casual observer. "We did not expect that the fit between flower spur and sunbird bill could be solved in such a simple way. Our enthusiasm was even greater when we realized the adaptive consequence for pollen placement."

I. frithii is an epiphyte. The plant grows on the surface of smaller trees or lower tree branches, with its red flowers protruding out of the foliage, explains Bartoš and his colleague Štěpán Janeček. While the architecture of other bird-pollinated flowers means that pollen can be placed only on birds' bellies or backs, more than 160 hours of video footage showed that the unique shape of I. frithii blossoms allows for placement of pollen on the underside of a visiting sunbird's head or bill.

That seemingly small difference in floral architecture and pollen placement must serve to reduce competition among I. frithii and its close relatives. It also presents a barrier between species. The discovery could have far-reaching implications for the plants' evolutionary past and future.

"Our observations demonstrate that a minute change in floral morphology can effectively overcome constraints resulting from the basal floral architecture early in the group's evolution," Bartoš and Janeček write. "We assume that such adaptations can not only help the plants avoid interspecific competition, but, as the adaptations create strong reproductive barriers, they may also contribute to plant speciation."

A bird-pollinated flower with a rather ingenious twist 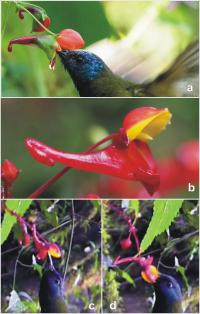