A pair of new studies reveals the multiple ways that a widely used insecticide harms bumblebees and honeybees.

The reports, one by a U.K. team and one by a French team, appear online at the Science Express Web site of the journal Science, on 29 March, 2012. Science is published by AAAS, the nonprofit, international science society.

Bumblebees and honeybees are important pollinators of flowering plants, including many major fruit and vegetable crops. Each year, for example, honeybee hives are trucked in to help pollinate almond, apple and blueberry crops, among others.

In recent years, honeybee populations have rapidly declined, in part due to a phenomenon known as Colony Collapse Disorder. Bumble bee populations have been suffering as well, according to Dave Goulson of the University of Stirling in Stirling, U.K., who is a co-author of one of the studies.

Researchers have proposed multiple causes for these declines, including pesticides, but it’s been unclear exactly how pesticides are inflicting their damage.

Both of the Science studies looked at the effects of neonicotinoid insecticides, which were introduced in the early 1990s and have now become one of the most widely used crop pesticides in the world. These compounds act on the insect’s central nervous system, and they spread to the nectar and pollen of flowering crops.

In one study, Penelope Whitehorn of the University of Stirling in Stirling, U.K. and colleagues exposed developing colonies of bumblebees, Bombus terrestris, to low levels of a neonicotinoid called imidacloprid. The doses were comparable to what the bees are often exposed to in the wild.

The researchers then placed the colonies in an enclosed field site where the bees could forage under natural conditions for six weeks. At the beginning and end of the experiment, the researchers weighed each of the bumblebee nests – which included the bees, wax, honey, bee grubs and pollen – to determine how much the colony had grown.

“Bumblebees pollinate many of our crops and wild flowers. The use of neonicotinoid pesticides on flowering crops clearly poses a threat to their health, and urgently needs to be re-evaluated,” said Goulson.

In the other Science report, a French team found that exposure to another neonicotinoid pesticide impairs honey bees’ homing abilities, causing many of the bees to die.

Mickaël Henry of the French National Institute for Agricultural Research (INRA) in Avignon, France and colleagues tagged free-ranging honeybees with tiny radio-frequency identification, or “RFID,” microchips that were glued to each bee’s thorax. These devices allowed the researchers to track the bees as they came and went from their hives. The researchers then gave some of the bees a sublethal dose of the pesticide thiamethoxam.

Compared to control bees that were not exposed to the pesticide, the treated bees were about two to three times more likely to die while away from their nests. These deaths probably occurred because the pesticide interfered with the bees’ homing systems, the researchers propose. In the second part of their study, the researchers used data from the tracking experiment to develop a mathematical model that simulated honeybee population dynamics. When the mortality caused by the homing failure was incorporated into the simulations, the model predicted that honeybee populations exposed to this pesticide should drop to a point from which it would be difficult to recover.

The authors note that even though manufacturers are required to ensure their pesticide doses remain below lethal levels for honeybees, the studies used to determine this lethality level have probably underestimated the ways that pesticides can kill bees indirectly, for example by interfering with their homing systems.

"Our study raises important issues regarding pesticide authorization procedures. So far, they mostly require manufacturers to ensure that doses encountered on the field do not kill bees, but they basically ignore the consequences of doses that do not kill them but may cause behavioral difficulties," said study author Mikaël Henry of INRA, in Avignon, France.

The Henry et al study was funded by the European Community program for French beekeeping coordinated by the French Ministry of Agriculture. 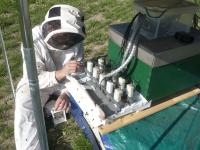