It is becoming more and more common to install solar panels on roofs in order to obtain green electricity, but not all roofs are equally suitable. Scientists from the University of Gothenburg, Sweden, have launched a tool that uses the actual conditions to determine the maximum possible magnitude of solar incidence - in a whole town, a neighbourhood, or a particular roof. The scientists have surveyed Gothenburg in a pilot project.

"The roofs structures of a town may be more or less suitable for the installation of solar panels, depending on such factors as how much a particular roof is shadowed by surrounding buildings and vegetation, the gradient of the roof, and the angle of incidence of sunlight. It is now possible for the first time to determine how much solar energy a particular roof will receive during the year", says Fredrik Lindberg of the Department of Earth Sciences at Gothenburg University.

The scientists at the University of Gothenburg have worked together with consultants WSP to develop a GIS system that can calculate the potential of actual roofs to produce energy from solar panels. The system is called "SEES" – Solar Energy from Existing Structures – and will be freely available to both companies and municipalities.

The new tool is based on computer-based geographical information systems (GIS) that collect, store, analyse and present geographical data. This means that the tool describes real roofs in the correct surroundings. The sun in the model illuminates the three-dimensional built environment and simulates how surrounding buildings, terrain and vegetation throw shadows.

The shadow effect can be calculated for each month or for a complete year, and this means that certain parts of a roof may turn out to be unsuitable for collecting solar energy, even though the roof has both optimal direction and gradient. In this way, it is possible to calculate the total solar radiation on each part of a roof structure within a given area, calculated as kilowatt hours per square metre.

Thus, SEES can provide a map over the suitability, based on the user's requirements for good, less good and poor annual solar incidence. Climate data (either measured or calculated values) with a resolution as high as 1 hour is used for the location at which SEES is being used, in order to obtain as accurate an estimate of solar incidence as possible.

"We have used Gothenburg as pilot town in the project, but the method can be used in all municipalities where the necessary data is made available. The users can judge the suitability of a roof for solar voltaic panels or solar thermal panels across a wide range, based on this", says Fredrik Lindberg.

The solar energy project has been carried out by the University of Gothenburg in collaboration with WSP Analys & Strategi, and it has just presented its final report. The project has been financed by the SolEl programme, the Research Foundation of Göteborg Energi, the City Planning Administration of Gothenburg and the Region Västra Götaland County Council.

Now you can determine the solar efficiency of your roof 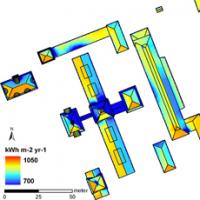