(Santa Barbara, Calif.) –– New research by scientists at UC Santa Barbara indicates a possible Antarctic location for ice that seemed to be missing at a key point in climate history 34 million years ago. The research, which has important implications for climate change, is described in a paper published today in Geophysical Research Letters, a journal of the American Geophysical Union.

"Using data from prior geological studies, we have constructed a model for the topography of West Antarctic bedrock at the time of the start of the global climate transition from warm 'greenhouse' earth to the current cool 'icehouse' earth some 34 million years ago," explained Douglas S. Wilson, first author and an associate research geophysicist with UCSB's Department of Earth Science and Marine Science Institute.

Wilson and his co-author, Bruce Luyendyk, a professor in the Department of Earth Science, discovered that, contrary to most current models for bedrock elevations of West Antarctica, the bedrock in the past was of much higher elevation and covered a much larger area than today. Current models assume that an archipelago of large islands existed under the ice at the start of the climate transition, similar to today, but Wilson and Luyendyk found that does not fit their new model. In fact, the authors state that the land area above sea level of West Antarctica was about 25 percent greater in the past.

Evidence for that large mass of ice comes from two sources: the chemical and isotopic composition in shell material of marine microfossils, which are sensitive to ocean temperatures and the amount of ice on land; and from geologic records of lowered sea level at the time that indicate how much ice formed on land to produce the sea level drop.

The new study, by showing that West Antarctica had a higher elevation 34 million years ago than previously thought, reveals a possible site for the accumulation of the early ice that is unaccounted for. "Preliminary climate modeling by researchers at Pennsylvania State University demonstrates that this new model of higher elevation West Antarctica bedrock topography can indeed host the missing ice," said Luyendyk. "Our results, therefore, have opened up a new paradigm for the history of the growth of the great global ice sheets. Both East and West Antarctica hosted the growing ice."

The new hypothesis may solve another conflict among climate scientists. Given that more ice grew than could be hosted on East Antarctica alone, some researchers have proposed that the missing ice formed in the northern hemisphere. This would have been many millions of years before the well-known documentation of ice growth there, which started about three million years ago; evidence for ice sheets in the northern hemisphere prior to that time is not established. The new bedrock model shows it is not necessary to have ice hosted in the northern polar regions at the start of global climate transition; West Antarctica could have accommodated the extra ice. 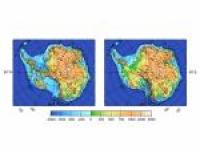