In a drama played out across the southeastern U.S. in containers as small as a coffee cup, native and invasive mosquito larvae compete for resources and try to avoid getting eaten. One of the invasive mosquitoes, the Asian tiger mosquito (Aedes albopictus), can carry dengue fever, a viral disease that sickens 50 to 100 million people a year in the tropics, so this seemingly inconsequential struggle has implications for human health.

In a new study in the British Ecological Society's Journal of Animal Ecology, researchers report that the larvae of a tiny fly, the midge Corethrella appendiculata, eat more of the larvae of the invasive Asian tiger mosquito than of the native Eastern treehole mosquito (Aedes triseriatus). This allows the native mosquitoes to survive even though the invasive mosquitoes are better at gobbling up resources.

(To see an audio slide show about the research, please go to: http://news.illinois.edu/slideshows/2009_Alto_Mosquitoes_Final/index.html)

The researchers found inherent size differences between the mosquito species. The treehole mosquito is larger than the Asian tiger mosquito, which makes it less vulnerable to predation from the small but voracious predatory midge. Previous studies have found that the native mosquito larvae also adopt less "risky" behaviors than the invasive mosquito larvae, making them less susceptible to being eaten.

"Size is having a major effect in terms of how the prey are getting consumed," said Barry Alto, a medical entomologist with the State Natural History Survey at the University of Illinois and principal investigator on the study.

"This is another mechanism that allows the native mosquito to hang on and co-exist with the invasive mosquitoes in certain areas where predators are present," Alto said.

The Asian tiger mosquito was first detected in the U.S. in 1985 in a shipment of used tires to a Texas port. Like the native mosquito, it lays its eggs in watery containers, including tires. Even if the water evaporates, a splash of rain and a supply of nutrients such as the microbes that feed on dead leaves are all that the larvae need to hatch and grow.

The interaction between predators and native and invasive mosquitoes is one of several factors that may contribute to disease transmission, Alto said.

"We want to know: Where do the invasive and the native species co-exist? Where does one or the other go extinct? And what happens in the areas where there's no predator?" he said. The insights that come from such studies may also apply to other native and invasive species, he said.

The research team included Banugopan Kesavaraju, formerly of Illinois State University and now at Rutgers University; Steven Juliano, of Illinois State University; and L. Philip Lounibos, of the University of Florida. Kesavaraju is an expert in the behavior of A. albopictus and A. triseriatus. Juliano has expertise in predation and competitive interactions among container mosquitoes and developed a mathematical model for the study. Lounibos is an expert on the invasion biology of A. albopictus. 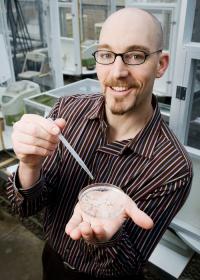 Barry Alto, University of Illinois at Urbana-Champaign (1 of 2) 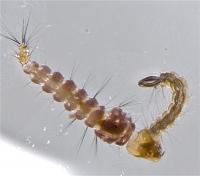