When NASA's Terra satellite passed over Tropical Cyclone Amara on December 20, its western quadrant was already moving over Rodrigues Island, Mauritius. Warnings are already in effect for the island, where residents are expecting hurricane-force winds.

A Class 3 tropical cyclone warning was in effect for the island on Dec. 20 and 21 as Amara brings heavy rains, hurricane-force winds, and strong storm surge to the island. Rodrigues Island is part of the Republic of Mauritius, and is located in the Southern Indian Ocean.

The MODIS instrument, also known as Moderate Resolution Imaging Spectroradiometer, that flies aboard NASA's Terra captured a visible image of Amara that showed the western edge of the storm's clouds had already moved over Rodrigues Island at 06:10 UTC/1:10 a.m. EST. The MODIS image also revealed an eye that was more cloudless than the day before.

At 0900 UTC/4 a.m. EST on December 20, Amara's maximum sustained winds were near 110 knots/126.6 mph/203.7 kph. It was centered near 18.3 south latitude and 65.3 east longitude, about 565 miles/650.2 miles/1,046 km east-northeast of La Reunion Island. Amara was just 68 miles/110 km north of Rodrigues Island. It was moving to the west-southwest at 6 knots/6.9 mph/11.1 kph and generating wave heights up to 32 feet/9.7 meters. For updated Rodrigues Island warnings (in French or Portuguese only), visit the Mauritius Meteorological Services website: http://metservice.intnet.mu/cyclone-bulletin-french-rodrigues.php

Amara is expected to be at its closest approach Rodrigues Island on December 21 and curve southeast while its eye remains just east of the island. Amara will start to weaken as it turns southeast. The tropical cyclone is then expected to dissipate after 4 to 5 days. 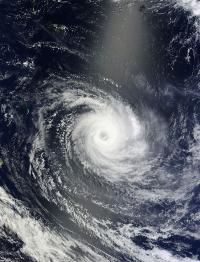