Scientists at Singapore's Nanyang Technological University (NTU Singapore) have created a paper-like material derived from pollen that bends and curls in response to changing levels of environmental humidity.

The ability of this paper made from pollen to alter its mechanical characteristics in response to external stimuli may make it useful in a wide range of applications, including soft robots, sensors, artificial muscles, and electric generators.

Combined with digital printing, pollen paper may hold promise for the fabrication of a new generation of programmable natural actuators - components in a machine that are responsible for moving and controlling a mechanism.

The findings, published in the Proceedings of the National Academy of Sciences of the United States of America this week, show how the NTU Singapore team formulated the paper using softened pollen grains.

NTU Distinguished University Professor Subra Suresh, who is also the NTU President, said: "Much progress has been made in developing bioinspired sensors and actuators based on engineered synthetic materials, but these materials come with limitations such as issues with environmental sustainability and relatively high cost. There remains a critical need to incorporate cost-effective and eco-friendly materials. Just as pine cones open and close their scales depending on the amount of moisture in the air, our NTU research team has shown that pollen paper created from naturally abundant pollen grains responds as an actuator to changes in environmental humidity."

NTU Professor Cho Nam-Joon, who holds the Materials Research Society of Singapore Chair in Materials Science and Engineering, said: "These findings build on the recent work by our NTU team, in which we showed how hard pollen grains can be converted into soft microgel particles that alter their properties in response to external stimuli. This process also renders pollen and the products we create from it, non-allergenic."

To form the paper, the NTU team first transformed the ultra-tough pollen grains from sunflowers into a pliable, gel-like material through a process similar to conventional soap-making. This process includes removing the sticky oil-based pollen cement that coats the grain's surface, before incubating the pollen in alkaline conditions for hours.

The resulting gel-like material is then cast into a mould and left to dry, forming a paper-like material. Using scanning electron microscopy, the scientists observed that the pollen-based paper comprises alternating layers of pollen particles, with the top layer significantly rougher than the bottom layer.

The top surface of the pollen paper, which appears frosted to the naked eye, showed remnants of the sunflower pollen grains' distinct spikes, contributing to its roughness. The bottom surface, which takes on a mirror-like surface finish, was relatively smoother.

This structural difference in pollen particle layers means that in the presence of water vapour the paper starts to bend, and under dry conditions, it unbends. Repeated cycles of humid and dry conditions cause the paper to perform a flipping motion over time.

To show that it is possible to customise the water-vapour responsiveness of pollen paper, the team adjusted processing parameters, chiefly the alkaline incubation time of the pollen grains. They joined two pollen paper samples, each prepared under different incubation times (3 hours and 12 hours), to form a strip of bi-material pollen paper with a visible boundary.

When the bi-material pollen paper was exposed to a humid-dry cycle, the two pollen paper samples' different reactions to humidity caused the paper to 'walk' like a caterpillar that moves by alternatingly expanding and contracting its soft body.

The scientists also demonstrated the potential application of pollen paper as a self-actuating soft robot through a flower made from pollen paper that 'blooms' through gradual absorption of water vapour.

In addition to Profs Suresh, Cho and Song, the list of authors include research fellows Ze Zhao, Youngkyu Hwang, and Tengfei Fan, and research associate Yun Yang, all from NTU. 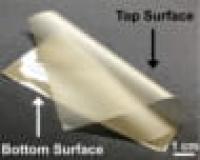