Just like we take a shower to wash away all the dirt and other particles, semiconductors also require a cleaning process. However, its cleaning goes extreme to make even trace contaminants "leave no trace". After all the chip fabrication materials are applied to a silicon wafer, a strict cleaning process is taken to remove residual particles. If this high-purity cleaning and particle-removal step goes wrong, its electrical connections in the chip are likely to suffer from it. With ever-miniaturized gadgets on the market, the purity standards of the electronics industry reach to a level, like finding a needle in a desert.

That explains why hydrogen peroxide (H2O2), a major electronic cleaning chemical, is one of the most valuable chemical feedstock that underpins the chip-making industry. Despite the ever-growing significance of H2O2, its industry has been left with an energy-intensive and multi-step method known as the anthraquinone process. This is an environmentally unfriendly process which involves the hydrogenation step using expensive palladium catalysts. Alternatively, H2O2 can be synthesized directly from H2 and O2 gas, although the reactivity is still very poor and it requires high pressure. Another eco-friendly method is to electrochemically reduce oxygen to H2O2 via 2-electron pathway. Recently, noble metal-based electrocatalysts (for example, Au-Pd, Pt-Hg, and Pd-Hg) have been demonstrated to show H2O2 productivity although such expensive investment has seen low returns that fails to meet the scalable industry needs.

Researchers at the Center for Nanoparticle Research (led by Director Taeghwan HYEON and Vice Director Yung-Eun SUNG) within the Institute for Basic Science (IBS) in collaboration with Professor Jong Suk YOO at University of Seoul recently report an ultimate electrocatalyst that addresses all of the issues that trouble H2O2 production. This new catalyst comprising the optimal Co-N4 molecules incorporated in nitrogen-doped graphene, Co1-NG(O), exhibits a record-high electrocatalytic reactivity, producing up to 8 times higher the amount of H2O2 that can be generated from rather expensive noble metal-based electrocatalysts (for example, Pt, Au-Pd, Pt-Hg and so on). The synthesized catalysts entirely comprise at least 2000 times less expensive elements (Co, N, C, and O) than the conventional palladium catalyst, and they are exceptionally stable without activity loss over 110 hours of H2O2 production.

Typically involving different phases of catalysts (usually solid) and reactants (gas), heterogeneous catalysts are widely exploited in many important industrial processes. Still, their catalytic property was thought to be controlled only by changing the constituent elements. In this study, the researchers verified that they can induce a specific interaction on heterogeneous catalysts by fine-tuning the local atomic configurations of the elements as seen in enzyme catalysts (Fig.2). Director Hyeon, the corresponding author of the study notes, "this study successfully demonstrated the possibility of controlling a catalytic property by tuning atomic compositions. This finding may bring us closer to discovering the fundamental properties of catalytic activities."

Next, the researchers designed the optimal cobalt atomic structure (Co1¬-N4(O)) by having all of the required conditions such as precise selection of element, synthesis temperature and various experimental conditions met. Combining theoretical simulations and nanomaterial synthesis technologies, the researchers were able to control the catalytic property in atomic precision. With electron-poor Co atoms (Co1¬-NG(O)), they were able to produce H2O2 with significantly high activity and stability, far surpassing the state-of-the-art noble metal catalysts. Conversely, electron-rich Co atoms exhibited a high reactivity for 4-electron oxygen reduction reaction to H2O formation which might be found useful for fuel cell applications.

Surprisingly, 341.2 kg of H2O2 can be produced within 1 day at room temperature and atmospheric pressure using 1 kg of Co1-NG(O) catalyst. This amount of H2O2 is up to 8 times higher the amount of H2O2 produced by the state-of-the-art noble metal catalysts (Fig.3). Co1-N4(O)) is an ultimate catalyst that allows low-cost, efficient, and eco-friendly production of H2O2. Professor Sung, the corresponding author says, "For the first time, we found that the catalytic property of heterogeneous catalysts can be fine-tuned in atomic precision. This unprecedented result will help us to understand previous unknown aspects of electrochemical H2O2 production. With this knowledge, we could design a scalable catalyst that is entirely composed of earth-abundant elements (Co, N, C, and O)." 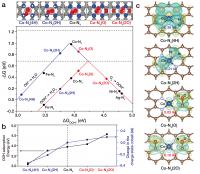