Genetic adaptations for life at high elevations found in residents of the Tibetan plateau likely originated around 30,000 years ago in peoples related to contemporary Sherpa. These genes were passed on to more recent migrants from lower elevations via population mixing, and then amplified by natural selection in the modern Tibetan gene pool, according to a new study by scientists from the University of Chicago and Case Western Reserve University, published in Nature Communications on Feb. 10.

The transfer of beneficial mutations between human populations and selective enrichment of these genes in descendent generations represents a novel mechanism for adaptation to new environments.

"The Tibetan genome appears to arise from a mixture of two ancestral gene pools," said Anna Di Rienzo, PhD, professor of human genetics at the University of Chicago and corresponding author of the study. "One migrated early to high altitude and adapted to this environment. The other, which migrated more recently from low altitudes, acquired the advantageous alleles from the resident high-altitude population by interbreeding and forming what we refer to today as Tibetans."

High elevations are challenging for humans because of low oxygen levels but Tibetans are well adapted to life above 13,000 feet. Due to physiological traits such as relatively low hemoglobin concentrations at altitude, Tibetans have lower risk of complications, such as thrombosis, compared to short-term visitors from low altitude. Unique to Tibetans are variants of the EGLN1 and EPAS1 genes, key genes in the oxygen homeostasis system at all altitudes. These variants were hypothesized to have evolved around 3,000 years ago, a date which conflicts with much older archaeological evidence of human settlement in Tibet.

To shed light on the evolutionary origins of these gene variants, Di Rienzo and her team, led by first author Choongwon Jeong, graduate student at the University of Chicago, obtained genome-wide data from 69 Nepalese Sherpa, an ethnic group related to Tibetans. These were analyzed together with the genomes of 96 unrelated individuals from high-altitude regions of the Tibetan plateau, worldwide genomes from HapMap3 and the Human Genome Diversity Panel, as well as data from Indian, Central Asian and two Siberian populations, through multiple statistical methods and sophisticated software.

Tracing the history of these ancestor groups through genome analysis, the team identified a population size split between Sherpa and lowland East Asians around 20,000 to 40,000 years ago, a range consistent with proposed archaeological, mitochondria DNA and Y chromosome evidence for an initial colonization of the Tibetan plateau around 30,000 years ago.

"This is a good example of evolution as a tinkerer," said Cynthia Beall, PhD, professor of anthropology at Case Western Reserve University and co-author on the study. "We see other examples of admixtures. Outside of Africa, most of us have Neanderthal genes—about 2 to 5 percent of our genome—and people today have some immune system genes from another ancient group called the Denisovans."

The team also found that Tibetans shared specific high-altitude component traits with Sherpa, such as the EGLN1 and EPAS1 gene variants, despite the significant amount of genome contribution from lowland East Asians. Further analysis revealed these adaptations were disproportionally enhanced in frequency in Tibetans after admixture, strong evidence of natural selection at play. This stands in contrast to existing models that propose selection works through new advantageous mutations or on existing variants becoming beneficial in a new environment.

"The chromosomal locations that are so important for Tibetans to live at high elevations are locations that have an excess of genetic ancestry from their high-altitude ancestral gene pool," Di Rienzo said. "This is a new tool we can use to identify advantageous alleles in Tibetans and other populations in the world that experienced this type of admixture and selection."

In addition to the EPAS1 and EGLN1 genes, the researchers discovered two other genes with a strong proportion of high-altitude genetic ancestry, HYOU1 and HMBS. The former is known to be up-regulated in response to low oxygen levels and the latter plays an important role in the production of heme, a major component of hemoglobin.

"There is a strong possibility that these genes are adaptations to high altitude," Di Rienzo adds. "They represent an example of how the ancestry-based approach used in this study will help make new discoveries about genetic adaptations."

The study "Admixture-facilitated genetic adaptations to high altitude in Tibet," was supported by the National Science Foundation. Additional authors include Gorka Alkorta-Aranburu, David B. Witonsky and Jonathan K. Pritchard from the University of Chicago, Buddha Basnyat from the Oxford University Clinical Research Unit at Patan Hospital in Nepal and Maniraj Neupane from the Mountain Medicine Society of Nepal.

Case Western Reserve University is one of the country's leading private research institutions. Located in Cleveland, we offer a unique combination of forward-thinking educational opportunities in an inspiring cultural setting. Our leading-edge faculty engage in teaching and research in a collaborative, hands-on environment. Our nationally recognized programs include arts and sciences, dental medicine, engineering, law, management, medicine, nursing and social work. About 4,200 undergraduate and 5,600 graduate students comprise our student body.

The genetic origins of high-altitude adaptations in Tibetans 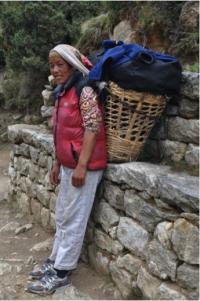 Genetic Structure of Sherpa and Tibetans Relative to Other East Asians