NASA infrared satellite data from this morning revealed that Tropical Storm Tomas has weakened into a tropical depression.

Tomas is in the central Caribbean Sea headed for Haiti this weekend, and forecasters are calling for a re-intensification before it makes landfall.

The National Hurricane Center (NHC) in Miami, Fla. reported at 5 a.m. EDT on Nov. 3 that hurricane hunter aircraft found an "ill-defined and elongated circulation with no tropical storm-force winds at the flight level or the surface." Thus, the status of Tomas was changed from a tropical storm to a tropical depression.

When NASA's Aqua satellite passed over Tomas on Nov. 3 at 06:17 UTC (2:17 a.m. EDT), the Atmospheric Infrared Sounder (AIRS) instrument onboard captured an infrared image of the cold thunderstorms within the system. The image showed that strong, high thunderstorm cloud tops appeared disorganized and scattered around the depression's center of circulation. The cloud tops have also warmed, indicating that the convection is not as strong as it was the day before.

What a difference 24 hours can make with a tropical cyclone. On the previous day, the Tropical Rainfall Measuring Mission (TRMM) satellite passed over Tomas at 0515 UTC (1:15 a.m. EDT). At that time, TRMM noticed that vertical wind shear (winds that can weaken a tropical cyclone) relaxed allowing Tomas to temporarily re-strengthen a little. At that time, data from TRMM's Microwave Imager (TMI) and Precipitation Radar (PR) revealed that Tomas was producing many strong thunderstorms over a large area of the Caribbean Sea. Since that time, the strength of Tomas' thunderstorms has waned.

Tomas is now a disorganized depression, and is moving at 5 mph toward the west-northwest. Tomas' maximum sustained winds were down to 35 mph. It was centered about 305 miles south-southeast of Kingston, Jamaica and 410 miles southwest of Port Au Prince, Haiti. The NHC estimates that Tomas' center is near 13.7 North and 75.8 West.

The National Hurricane Center's forecast still calls for Tomas to re-intensify into a hurricane before reaching Haiti late Friday, so residents should prepare for its arrival. 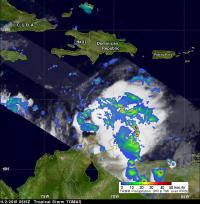