Cholesterol is crucial to the formation of the cell membranes of mammals and is part of many life processes. One of the most controversial concepts in biophysics is the hypothesis of the so-called lipid rafts: areas of high concentrations of cholesterol and glycosphingolipids in membranes. These lipid rafts, also known as lipid microdomains, are areas of the cell membrane in which lipids and cholesterol accumulate and play an important role in cell function. Currently, the presence of lipid rafts in live cells is only a hypothesis because although various laboratory studies have attempted to simulate them by mixing two types of lipid and cholesterol, none has managed to detect them or determine whether they really exist, how they are formed and how they function in live cells.

It is suspected that lipid rafts are also responsible for the onset of diseases such as Creutzfeldt-Jakob or AIDS, the pathogens of which pass through them to enter the cells. Therefore, understanding their mechanism is fundamental to determining how these diseases develop.

A team of physicists led by the researcher of the URV's Department of Chemical Engineering Vladimir Baulin has designed an experiment that simulates the formation of a new type of lipid raft on a nanometric scale around objects incrusted in the membranes such as proteins and ion channels. The results of this study have been published in the journal Physical Review Letters.

"Ion channels are a sort of transmembrane protein - that's to say, they span the whole cell membrane - which, in conjunction with proteins, allow specific ions to pass from one side of the membrane to the other. They are part of it and contain cholesterol. The role transmembrane proteins play in the possible formation of these cholesterol nanodomains is unknown," says Vladidimir Baulin about the research results.

In this research, the scientists have carried out an experiment with a lipid membrane very similar to human cells in terms of the size scale, and the dimension and composition of the cholesterol. They substituted the transmembrane protein for an ultra-short carbon nanotube - 10 nanometres long. And after a series of simulations they confirmed that these domains - the lipid rafts - are highly dynamic, they form and then disappear only to form again and they exist for approximately 10 nanoseconds.

The team also made another important discovery about the role of cholesterol in membranes: cholesterol may be responsible for destabilizing the membranes and helping nanometric-sized objects to enter the cells. "It was like finding the key for opening and closing doors through a membrane," said Vladimir Baulin. "We found that when there are high concentrations of cholesterol, nanotubes can spontaneously leave the membrane in a question of milliseconds. But if the membrane has no cholesterol, they remain trapped inside."

This study may serve to develop new crucial approaches for researching lipid rafts, so the development of some diseases and cell processes will also be better understood. 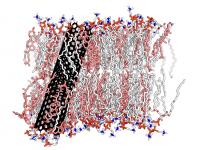 Simulation of a Nanotube Introduced to the Lipid Membrane