Does your salad know what time it is? It may be healthier for you if it does, according to new research from Rice University and the University of California at Davis.

"Vegetables and fruits don't die the moment they are harvested," said Rice biologist Janet Braam, the lead researcher on a new study this week in Current Biology. "They respond to their environment for days, and we found we could use light to coax them to make more cancer-fighting antioxidants at certain times of day." Braam is professor and chair of Rice's Department of Biochemistry and Cell Biology.

Braam's team simulated day-night cycles of light and dark to control the internal clocks of fruits and vegetables, including cabbage, carrots, squash and blueberries. The research is a follow-up to her team's award-winning 2012 study of the ways that plants use their internal circadian clocks to defend themselves from hungry insects. That study found that Arabidopsis thaliana -- a widely used model organism for plant studies -- begins ramping up production of insect-fighting chemicals a few hours before sunrise, the time that hungry insects begin to feed.

Braam said the idea for the new research came from a conversation with her teenage son.

"I was telling him about the earlier work on Arabidopsis and insect resistance, and he said, 'Well, I know what time of day I'll eat my vegetables!' Braam said. "That was my 'aha!' moment. He was thinking to avoid eating the vegetables when they would be accumulating the anti-insect chemicals, but I knew that some of those chemicals were known to be valuable metabolites for human health, so I decided to try and find out whether vegetables cycle those compounds based on circadian rhythms."

Arabidopsis and cabbage are related, so Braam's team began their research by attempting to "entrain" the clocks of cabbage in the same way they had Arabidopsis. Entrainment is akin to the process that international travelers go through as they recover from jet lag. After flying to the other side of the globe, travelers often have trouble sleeping until their internal circadian clock resets itself to the day-night cycle in their new locale.

Using controlled lighting in a sealed chamber, Rice graduate student and study lead author Danielle Goodspeed found she could entrain the circadian clocks of postharvest cabbage just as she had those of Arabidopsis in the 2012 study. Following the success with cabbage, Goodspeed and co-authors John Liu and Zhengji Sheng studied spinach, lettuce, zucchini, carrots, sweet potatoes and blueberries.

"We were able to entrain each of them, even the root vegetables," Goodspeed said. She and Braam said the findings suggest that storing fruits and vegetables in dark trucks, boxes and refrigerators may reduce their ability to keep daily rhythms.

"We cannot yet say whether all-dark or all-light conditions shorten the shelf life of fruits and vegetables," Braam said. "What we have shown is that keeping the internal clock ticking is advantageous with respect to insect resistance and could also yield health benefits."

In the cabbage experiments, Braam, Goodspeed and Rice co-authors John Liu, Zhengji "Jim" Sheng and Wassim Chehab found they could manipulate cabbage leaves to increase their production of anti-insect metabolites at certain times of day. One of these, an antioxidant called glucoraphanin, or 4-MSO, is a known anti-cancer compound that has been previously studied in broccoli and other vegetables.

Braam's team has already begun follow-up research, which is supported by the Bill and Melinda Gates Foundation, into whether light and other stimuli, like touch, may be used to enhance pest resistance of food crops in developing countries.

"It's exciting to think that we may be able to boost the health benefits of our produce simply by changing the way we store it," Goodspeed said.

Additional co-authors include Marta Francisco and Daniel Kliebenstein, both of the University of California at Davis. The research was supported by the National Science Foundation and by a 2011 Medical Innovation Award from the Rice University Institute of Bioscience and Bioengineering.

VIDEOS are available at:

Does your salad know what time it is? https://www.youtube.com/watch?v=2zzgpPpln5k

Braam and Chehab describe the group's award-winning 2012 study in this podcast: http://www.pnas.org/site/misc/CozzarelliClassVI-Podcast.mp3

Located on a 300-acre forested campus in Houston, Rice University is consistently ranked among the nation's top 20 universities by U.S. News & World Report. Rice has highly respected schools of Architecture, Business, Continuing Studies, Engineering, Humanities, Music, Natural Sciences and Social Sciences and is home to the Baker Institute for Public Policy. With 3,708 undergraduates and 2,374 graduate students, Rice's undergraduate student-to-faculty ratio is 6-to-1. Its residential college system builds close-knit communities and lifelong friendships, just one reason why Rice has been ranked No. 1 for best quality of life multiple times by the Princeton Review and No. 2 for "best value" among private universities by Kiplinger's Personal Finance. To read "What they're saying about Rice," go to http://tinyurl.com/AboutRiceU.

Does your salad know what time it is? 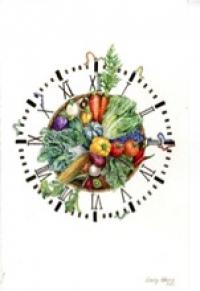