Taking the "One Million-Mu (666 km2)" Plain Afforestation (Phase I) Project as an example, the authors characterized the growth status and temporal trends of forest patches using time series NDVI. They selected forest patches with greater than 50 ha in size as the main objects for analysis. Using the maximum NDVI in the base year (2012), they calculated the change ratio of forest patches in different years. These ratios were further divided into three categories using the natural break approach. That is decreasing, relatively stable without notable changes and increasing. According to derived categories from the trend of greenness in forest patches, they analyzed the initial status of vegetation growing in the base year 2012 (Fig. 1). They found that the greenness of forest patches that were categorized as decreasing (in total 30) was relatively high in 2012 (i.e., ranging from 0.6 to 0.8). Meanwhile, these patches had a relatively low heterogeneity (Fig. 1a). This result suggests that the growing status of vegetation before afforestation is good. However, for those forest patches categorized as increasing (in total 33), their greenness is relatively low in 2012 and has a high heterogeneity (e.g., from 0.2 to 0.8) for pixels within the patch (Fig. 1b).

The authors found the growth status of some forest patches becomes worse in the Phase I afforestation project. For those farmland patches with relatively high greenness and low heterogeneity, their growth status is likely to become worse due to the interruption of afforestation. Also, the afforestation project occupies massive fertile farmland through decreasing their connectivity and compactness. These findings are helpful to urban greenspace planning in the future.

According to the results from Phase I afforestation and the impact of urbanization on green space, they constructed a series of spatial variables and generated a suitability map for the next "New Round of One Million-Mu (666km2) Afforestation project" (Phase II). The key of this evaluation is to maximize the suitability of vegetation growth based on the spatial distribution of patches, the initial growing status of vegetation (e.g., forest coverage, NDVI value, heterogeneity), and the temporal trend of greenspace over a given historical period. They modeled the distribution of forest patches in the Phase II afforestation project and assessed their suitability from an urban planning perspective (Fig. 2). Also, the basic farmland is not allowed for afforestation, while the abandoned built-up areas are preferentially considered for afforestation. Different from traditional approaches that operate at the pixel level, they used segments as our basic modeling unit in this study to represent the shape of forest patches appropriately. Their modeling results suggest most afforested areas are located in peripheral districts in the plain area of Beijing. Meanwhile, human intervention through occupying farmland around the existing forest patches is not recommended.

The authors derived the spatial map of reforestation areas at the segment scale in the Phase II afforestation project (Fig. 3). Comparing the results from the Phase I and Phase II, their overall patterns are similar, i.e., most of the forest patches are in Tongzhou, Daxing, Shunyi, and other districts with flat terrain. These regions are not only the focus of building greening and suitable urban society from the planning aspect but also the main area of the afforestation zones suggested in the Beijing Master Plan (2016-2035).

This study evaluated the implementation of urban green space planning using a multi-source dataset. Different from traditional approaches that focus on the current status of vegetation, they proposed a dynamic approach to evaluating the growth status of green space, taking into account the trend of greenness over the years. They developed a modeling approach to explore the spatial distribution of urban greenspace, in consideration of the patch distribution, the initial growing status of vegetation, temporal trends of growth, and particular planning constraints. The derived results can support decision making for urban greenspace planning. The proposed evaluation framework for the afforestation project can be extended to the national scale, by offering scientific insights to the monitoring and planning of regional afforestation project. 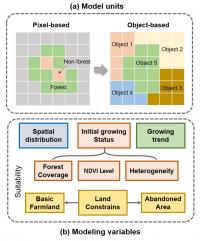