Two non-invasive chemical imaging modalities were employed to help understand the changes made over time to the Lamb of God, the focal point of the Ghent Altarpiece (1432) by Hubert and Jan Van Eyck. Two major results were obtained: a prediction of the facial features of the Lamb of God that had been hidden beneath non-original overpaint dating from the 16th century (and later), and evidence for a smaller earlier version of the Lamb's body with a more naturalistic build. These non-invasive imaging methods, combined with analysis of paint cross-sections and magnified examination of the paint surface, provide objective chemical evidence to understand the extent of overpaints and the state of preservation of the original Eyckian paint underneath.

The Ghent Altarpiece is one of the founding masterpieces of Western European painting. The central panel, The Adoration of the Lamb, represents the sacrifice of Christ with a depiction of the Lamb of God standing on an altar, blood pouring into a chalice. During conservation treatment and technical analysis in the 1950s, conservators recognized the presence of overpaint on the Lamb and the surrounding area. But based on the evidence available at that time, the decision was made to remove only the overpaint obscuring the background immediately surrounding the head. As a result, the ears of the Eyckian Lamb were uncovered, leading to the surprising effect of a head with four ears (Figure 1).

During the recent conservation treatment of the central panel, chemical images collected before 16th century overpaint was removed revealed facial features that predicted aspects of the Eyckian Lamb, at that time still hidden below the overpaint. For example, the smaller, v-shaped nostrils of the Eyckian Lamb are situated higher than the 16th century nose, as revealed in the map for mercury, an element associated with the red pigment vermilion (Figure 2, red arrow). A pair of eyes that look forward, slightly lower than the 16th century eyes, can be seen in a false-color hyperspectral infrared reflectance image (Figure 2, right). This image also shows dark preparatory underdrawing lines that define pursed lips, and in conjunction with the presence of mercury in this area, suggest the Eyckian lips were more prominent. In addition, the higher, 16th century ears were painted over the gilded rays of the halo (Figure 2, yellow rays). Gilding is typically the artist's final touch when working on a painting, which supports the conclusion that the lower set of ears is the Eyckian original. Collectively, these facial features indicate that, compared to the 16th century restorer's overpainted face, the Eyckian Lamb has a smaller face with a distinctive expression.

Figure 2: Left: Colorized composite elemental map showing the distribution of gold (in yellow), mercury (in red), and lead (in white). The red arrow indicates the position of the Eyckian Lamb's nostrils. (University of Antwerp). Right: Composite false-color infrared reflectance image (blue - 1000 nm, green - 1350 nm, red - 1650 nm) shows underdrawn lines indicating the position of facial features of the Eyckian Lamb, including forward-gazing eyes, the division between the lips, and the jawline. (National Gallery of Art, Washington). The dotted lines indicate the outline of the head before removal of 16th century overpaint.

The new imaging also revealed previously unrecognized revisions to the size and shape of the Lamb's body: a more naturalistically shaped Lamb, with slightly sagging back, more rounded hindquarters and a smaller tail. The artist's underdrawing lines used to lay out the design of the smaller shape can be seen in the false-color hyperspectral infrared reflectance image (Figure 3, lower left, white arrows). Mathematical processing of the reflectance dataset to emphasize a spectral feature associated with the pigment lead white resulted in a clearer image of the smaller Lamb (Figure 3, lower right). Differences between the paint handling of the fleece in the initial small Lamb and the revised area of the larger Lamb also were found upon reexamination of the x-radiograph and the paint surface under the microscope.

During the conservation treatment completed in 2019, decisions were informed by well-established conservation methods (high-resolution color photography, X-radiography, infrared imaging, paint sample analysis) as well as the new chemical imaging. In this way, the conservation treatment uncovered the smaller face of the Eyckian Lamb, with forward-facing eyes that meet the viewer's gaze. Only overpaints that could be identified as being later additions dating from the 16th century onward were carefully and safely removed. The body of the Lamb, however, has not changed. The material evidence indicates that the lead white paint layer used to define the larger squared-off hindquarters was applied prior to the 16th century restoration, but because analysis at the present time cannot definitively establish whether this was a change by the original artist(s) or a very early restoration or alteration by another artist, the enlarged contour of the Lamb was left untouched.

Chemical imaging technologies can be used to build confidence about the state of preservation of original paint and help guide the decision to remove overpaint. Combined with the conservators' thorough optical examination, informed by years of experience and insights derived from paint cross-sections, chemical imaging methods will no doubt be central to ongoing interdisciplinary research, helping to resolve long-standing art-historical issues on the Ghent Altarpiece as well as other works of art. These findings were obtained by researchers from the University of Antwerp using macroscale X-ray fluorescence imaging and researchers at the National Gallery of Art, Washington using infrared reflectance imaging spectroscopy, interpreted in conjunction with the observations of the scientists and the conservation team from The Royal Institute for Cultural Heritage (KIK-IRPA), Brussels.

University of Antwerp - Faculty of Science 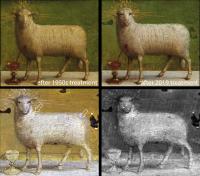