WOODS HOLE, Mass. -- Marine fungi have long been overlooked in the research community, despite their likely contributions to the health of ocean ecosystems. Now, a first deep dive into the diversity of marine fungi and their cell division cycles has been published by a collaborative team at the Marine Biological Laboratory (MBL), opening the door on this oft-neglected branch of the Kingdom Fungi.

"There's hardly anything known about fungi in the marine environment," says Amy Gladfelter, MBL Fellow from the University of North Carolina at Chapel Hill and senior author on the new study, published in Current Biology. "This was an opportunity to understand who might be there and what they're doing, and also discover some new fungal systems that might display interesting biology."

The paper describes 35 species of marine fungi collected from various sites around Woods Hole, many of which have never been studied before. The team found plenty of surprises, including unconventional cell division cycles in certain black fungi often found in extreme ocean environments.

"There's a lot of diversity in marine fungi--morphological and species diversity, possibly ecological functional diversity--that we don't know a lot about yet. And it's really worth digging into," says Lorna Mitchison-Field, first author on the paper.

The research project was borne from Gladfelter's long-time interest in fungi and their cell biological processes, such as polarity and cell division. She partnered with Christine Field, Lecturer at Harvard University and MBL Whitman Center scientist, and Mitchison-Field, who was an undergraduate at Mount Holyoke College during the bulk of the project and spent their summers at MBL.

"We brought back samples from coastal water, marshes, beaches, and other environments and plated them out on different kinds of media with nutrients, hoping to culture fungi," says Mitchison-Field. "Then I observed the colony growth through a period of usually one to two-and-a-half weeks. As they grew, I would pick specific colonies to isolate and we'd look at those using [time-lapse] differential interference contrast (DIC) microscopy."

A group of black yeast species proved particularly interesting. One species produced multiple buds per cell cycle, rather than the single bud seen in the classical model of fungal reproduction. Another species alternated its methods of reproduction, switching between fission and budding each cell-division cycle.

Being the first study of its kind, their paper is already making waves in cell biology. (See Commentary, here.)

"The reaction that we've gotten from cell biologists...is a sense of wonder," says Gladfelter. "Like, 'Wow, there's so much out there still that we don't know.' We hope this inspires people to keep looking for new biology in this incredibly diverse biosphere that has only barely been studied."

Because they found so many different types of fungi in such varied locations, the team hopes to study how fungi interact with their environments.

"One future hope is that we can start looking at fungi in the context of different hosts," says Gladfelter, "taking not just a culture-based approach, but a metagenomics identification of everybody who's there and what sort of genes they're expressing."

Mitchison-Field has spent many summers in Woods Hole with their parents, Christine Field and Tim Mitchison, longtime MBL Whitman Center scientists from Harvard University. This MBL collaboration with Gladfelter and several other visiting scientists allowed Mitchison-Field, while still an undergraduate, to strengthen field and lab work skills in a real-world setting, resulting in their first paper as a first author. 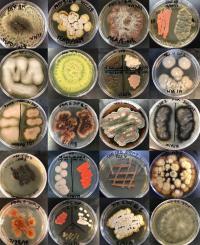