NASA satellites have been providing forecasters with various types of imagery on Typhoon Amphan as it heads toward a landfall near the border of eastern India and Bangladesh on May 20.

NASA-NOAA's Suomi NPP satellite provided visible imagery of Amphan and NASA's Aqua satellite provided an infrared view of the storm's cloud top temperatures. Amphan was moving north through the Bay of Bengal and forecast to make landfall in northeastern India near Kolkata, which is just west of the border with Bangladesh.

The Bay of Bengal is located in the northeastern part of the Indian Ocean. The Bay is framed by India to the west, Bangladesh to the north, and Myanmar to the east.

On May 19, the Visible Infrared Imaging Radiometer Suite (VIIRS) instrument aboard Suomi NPP provided a visible image Amphan. The image showed that Amphan covered the northern part of the Bay of Bengal.

Tropical cyclones are made up hundreds of thunderstorms, and infrared data can show where the strongest storms are located. They can do that because infrared data provides temperature information, and the strongest thunderstorms that reach highest into the atmosphere have the coldest cloud top temperatures. Convection is rising air that condenses and forms the thunderstorms that make up a tropical cyclone. When it is strong, it pushes clouds higher into the troposphere (the layer of atmosphere closest to Earth's surface). The higher you go in the troposphere, the colder the air temperature gets and colder cloud tops indicate stronger storms.

On May 20, 2020, at 3:30 a.m. EDT (0730 UTC) the Moderate Resolution Imaging Spectroradiometer or MODIS instrument and the Atmospheric Infrared Sounder or AIRS instrument that both fly aboard NASA's Aqua satellite found coldest cloud top temperatures in a large area around Amphan's center of circulation and along the coast on northeastern India. It was as cold as or colder than minus 80 degrees Fahrenheit (minus 62.2 Celsius). NASA research has found that cloud top temperatures that cold indicate strong storms with the potential to generate heavy rainfall.

On May 20 at 5 a.m. EDT (0900 UTC), Tropical Cyclone Amphan was located near latitude 20.5 degrees north and longitude 87.9 degrees east, approximately, 129 miles south-southwest of Kolkata, India. Amphan was moving to the north-northeast and had maximum sustained winds 85 knots (98 mph/157 kph). Amphan continued to hold on to Category 2 hurricane status on the Saffir-Simpson Hurricane Wind Scale.

Forecasters at the Joint Typhoon Warning Center said that Amphan was weakening as it moves north-northeast toward landfall. That landfall occurred in the morning hours of May 20 Eastern Daylight Time.

The Regional Specialized Meteorological Center (RSMC) in New Dehli, India reported, "Amphan crossed West Bengal-Bangladesh coast between Digha (West Bengal) and Hatiya Islands (Bangladesh) across Sunderbans near latitude 21.65 degrees north and longitude 88.3 degrees east between 1530 and 1730 [India Standard Time or] IST (6  and 8 a.m. EDT) on May 20 with wind speed of 155-165 kph [96 to 103 mph]." Amphan is forecast to move inland in a north-northeasterly direction.

Tropical cyclones/hurricanes are the most powerful weather events on Earth. NASA researches these storms to determine how they rapidly intensify, develop and behave. NASA's expertise in space and scientific exploration contributes to essential services provided to the American people by other federal agencies, such as hurricane weather forecasting. 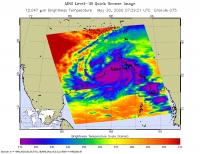