Cambridge, Mass. -- May 19, 2008 -- Engineers and applied physicists from Harvard University have demonstrated the first room-temperature electrically-pumped semiconductor source of coherent Terahertz (THz) radiation, also known as T-rays. The breakthrough in laser technology, based upon commercially available nanotechnology, has the potential to become a standard Terahertz source to support applications ranging from security screening to chemical sensing.

Spearheaded by research associate Mikhail Belkin and Federico Capasso, Robert L. Wallace Professor of Applied Physics and Vinton Hayes Senior Research Fellow in Electrical Engineering, both of Harvard's School of Engineering and Applied Sciences (SEAS), the findings will be published in the May 19 issue of Applied Physics Letters. The researchers have also filed for U.S. patents covering the novel device.

Using lasers in the Terahertz spectral range, which covers wavelengths from 30 to 300å, has long presented a major hurdle to engineers. In particular, making electrically pumped room-temperature and thermoelectrically-cooled Terahertz semiconductor lasers has been a major challenge. These devices require cryogenic cooling, greatly limiting their use in everyday applications.

"By contrast, our device emits T-rays with several hundreds of nanowatts of power at room temperature and microwatts of power at temperatures easily achievable with commercially available thermoelectric coolers," says Belkin. "Further, there is the potential of increasing the terahertz output power to milliwatt levels by optimizing the semiconductor nanostructure of the active region and by improving the extraction efficiency of the terahertz radiation."

To achieve the breakthrough and overcome the temperature limitations of current laser designs, the researchers engineered a room temperature mid-infrared Quantum Cascade Laser (QCL) that emits light at two frequencies simultaneously. The generation of Terahertz radiation occurs via the process of difference-frequency generation inside the laser material at room temperature at a frequency of 5 THz (equal to the difference of the two mid-infrared QCL frequencies).

Mid-infrared QCLs were invented and demonstrated by Capasso and his team at Bell Labs in 1994. The compact millimeter length semiconductor lasers operate routinely at room temperature with high optical powers and are increasingly used in the commercial sector for wide range of applications in chemical sensing and trace gas analysis. The devices, made by stacking ultra-thin atomic layers of semiconductor materials on top of each other, are variable and tunable, allowing an engineer to adjust the energy levels in the structure to create artificial laser medium.

"Terahertz imaging and sensing is a very promising but relatively new technology that requires compact, portable and tunable sources to achieve widespread penetration. Our devices are an important first step in this direction," said Capasso. "We believe our THz source has great development potential because the nanoscale material used was grown by Molecular Beam Epitaxy, a commercial and widely used thin film growth technique which 'spray paints' atoms on a surface one layer at a time."

The ability of Terahertz rays to penetrate efficiently through paper, clothing, cardboard, plastic and many other materials makes them ideal for use in many applications. For example, a device emitting T-rays could be used to image concealed weapons, detect chemical and biological agents through sealed packages, see tumors without causing any harmful side effects, and spot defects within materials such as cracks in the Space Shuttle's foam insulation.

Belkin and Capasso's co-authors are Feng Xie and Alexey Belyanin, Department of Physics at Texas A&M University, College Station; and Milan Fischer, Andreas Wittmann, and Jérôme Faist, Institute of Quantum Electronics at ETH, Zürich, Switzerland. The research was supported by the Air Force Office of Scientific Research and the National Science Foundation. The authors also acknowledge the support of two Harvard-based centers, the Nanoscale Science and Engineering Center and the Center for Nanoscale Systems, a member of the National Nanotechnology Infrastructure Network. 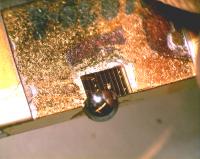