In South Africa, the Child Support Grant (CSG), a cash transfer for poor children, reaches a third of children under eight years. It is one of the country's most successful poverty reduction programmes with positive benefits for children, but by itself it cannot address all the socioeconomic and developmental needs of children and their families.

A new study and a resulting policy brief, examines the mental health status of the caregiver and its impact on child food security and perceptions of the child's health. The findings point to the need for psychosocial care for caregivers and for family and community-based developmental welfare interventions to scale up the impact of social grants.

In the study of 3123 children under eight years and their families who receive social grants, caregivers were almost all women (97%), had a secondary education and were largely unemployed (87%). One in two caregivers lived in households where no one was employed and all the children in the study lived in households that earned below the upper bound of the poverty line. In view of the rising poverty rates in the country, it is anticipated that the situation of grant beneficiary children has worsened since the data was collected.

Despite the positive benefits of the CSG in ensuring food security, four out of ten children and adults experienced hunger to some extent over a 12 month period due to food shortages. Moreover, 17% of children under 5 years were found to be moderately stunted and 9% were severely stunted. This is caused by long-term nutritional deprivation, which results in delayed cognitive development and poor school performance.

"Although two thirds of caregivers experienced good mental health, a third were at risk of depression, which was more marked among those with lower education and income and who were living in urban areas," said Prof Leila Patel, Director of the Centre for Social Development in Africa (CSDA) at the University of Johannesburg.

"The study also found that the presence of symptoms of caregiver depression had a negative effect on child food security and these caregivers perceived the health of the children in their care to be poorer than the rest of the sample. Similar findings emerged from studies in the United States where poverty and food insecurity were associated with parental depression and behavioural problems in children. Depression is a significant risk factor that could compromise child well-being outcomes," added Prof Patel.

Having family or a social support network could moderate negative life experiences. A positive finding was therefore that 77% of caregivers had another family member to help them with the care of the children.

Caregiver relations with the children

Though primary caregivers had a sound knowledge of the emotional and social care needs of the children, they had trouble in managing the behaviour of the children. Some reported using harsh disciplinary practices but were open to learning about different ways of managing children's behaviour. "The caregivers indicated a significant need for knowledge and skills in alternative styles of discipline to more effectively manage the behaviour of children, and build on positive parenting strategies that exist," said co-author Prof Trudie Knijn, from the University of Utrecht.

Prof Deborah Gorman-Smith, from the School of Social Administration at the University of Chicago who pioneered the SAFEChildren programme in the United States, and a member of the research team, reiterated this. She said that "preventative family interventions that provide social support and parenting education contributed to better school completion rates and reduced violence in children in a longitudinal study in poor African American communities in the United States".

Family strengthening programmes that are community based could improve family functioning. Nutritional support is also needed, especially for larger households that are severely food insecure in rural areas where the need was found to be greatest. Access to quality basic services, such as shelter, water, electricity, sanitation, transport, safety and security, health services, and access to childcare services, could boost caregiver and child wellbeing if improved.

Caregivers of child support beneficiaries at risk for depression 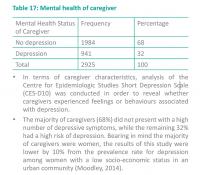