Collaborations on climate change research are divided into separate regions of the world with little knowledge exchange between them shows a new Danish-Brazilian study led by the University of Copenhagen. The most vulnerable countries of the world are largely disconnected from the production and flow of scientific knowledge on climate change, leaving their climate policymaking with little contextually relevant advice. The study calls for initiatives across private, governmental and non-governmental organisations, and from researchers themselves to diminish the knowledge gap.

When new research on climate change is published it most often concerns and is produced by the developed countries and the BRICS countries Brazil, India, China and South Africa rather than countries most vulnerable, but less contributing, to climate change.

"Without locally generated knowledge, it is more challenging to provide and integrate contextually relevant advice, and this leaves a critical gap in the climate policy debates. This is particularly worrying as we are dealing with countries likely to experience severe climatic changes and that are most sensitive to its detrimental impacts" says lead-author and postdoc Maya Pasgaard from the Department of Geosciences and Natural Resource Management at the University of Copenhagen.

"The regional divides limit critical flows of experiences and competencies across geographical and political-economic boundaries; a flow which is also needed to tackle the many threats and challenges of comparable character across regions, such as changes in crops, pest management and adaptation to climate hazards," says co-author and Professor Niels Strange from the Center for Macroecology, Evolution and Climate at the University of Copenhagen.

With the exception of some South American and African countries who share research interests, knowledge exchange on climate change suffers from large regional divides, in particular among vulnerable, developing regions.

The study recommends initiatives that focus on strengthening collaborations across geographical distances and across national differences in climate, export, democracy and national economy, as well as strengthening the local production and integration of knowledge.

Co-author and Assistant Professor Bo Dalsgaard from the Center for Macroecology, Evolution and Climate says:

"There is an array of partners responsible for increasing collaborations, ranging from big international organisations, such as the UN, to individual governments and higher education leaders. We also urge individual researchers and private companies alike to take responsibility for increasing cross-national collaborations and thus increase knowledge exchange between regions".

He is personally involved in a collaborative project across geographical, climatic and political-economic boundaries with UNICAMP in Brazil, the University of the West Indies in Jamaica, local coffee growers from, amongst other players, the Jamaican Coffee Growers' Association, and the London-based gourmet coffee brand Oubu Coffee. Together they study the effects of climate on the pollination of coffee in the Blue Mountains of Jamaica, West Indies.

"This project was initiated through a personal network between me, Oubu Coffee and their relations within Jamaica. As researchers we have to be willing to drive the transition forward through such opportunities and networks. Waiting for international institutions or governments to create new initiatives is not the only way forward" says Bo Dalsgaard.

Maya Pasgaard also has experience with research collaboration across regions, working together with a local researcher from Cambodia on community-based forest protection to mitigate climate change.

"Cross-border collaborations are not just highly relevant scientifically, but also rewarding on a personal level, as cultural knowledge exchange becomes an integrated part of the collaboration" she says.

The study is published online in the journal Global Environmental Change.

The most vulnerable countries miss out on climate change knowledge

Percentages of Locally Based Authors in Climate Change Research 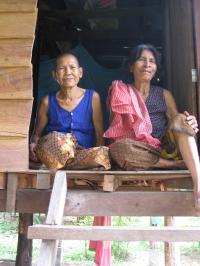