There are approximately 40,000 species of spiders in the world, all of which have been thought to be strict predators that feed on insects or other animals. Now, scientists have found that a small Central American jumping spider has a uniquely different diet: the species Bagheera kiplingi feeds predominantly on plant food.

The research, led by Christopher Meehan of Villanova University and Eric Olson of Brandeis University, has revealed the extraordinary ecology and behavior in Bagheera kiplingi, which lives throughout much of Central America and southern Mexico. There, the spider inhabits several species of acacia shrubs involved in a co-evolutionary mutualism with certain ants that has long been a staple of ecology textbooks: the ants fiercely guard the plants against most would-be herbivores, while the acacias provide both housing for the ants via swollen, hollow spines and food in the form of nectar (excreted from glands at the base of each leaf) and specialized leaf tips known as Beltian bodies. The Bagheera spiders are "cheaters" in the ant-acacia system, stealing and eating both nectar and—most remarkably—Beltian bodies without helping to defend the plant. The spiders get the job done through active avoidance of patrolling acacia-ants, relying on excellent eyesight, agility, and cognitive skills.

The research will appear in the October 13 issue of Current Biology, accompanied by a Dispatch article highlighting the study's importance.

Co-author Olson first discovered herbivory by the spiders in Costa Rica in 2001. In 2007, Meehan independently observed the same behaviors in a spider population in coastal Quintana Roo, south of Cancún, Mexico, during a field project for a Tropical Biology course taught by Villanova professor and study co-author Robert Curry. The two research groups subsequently combined efforts to jointly publish the discovery. The research also formed the basis of Meehan's Masters degree from Villanova, completed in 2009.

In the field, the researchers documented behavioral patterns through direct observations and high-definition video recordings. Herbivory was especially clear in the Mexican population: Beltian bodies accounted for more than 90% of 140 food items identified. According to Meehan, "This is the first spider in the world known to deliberately 'hunt' plant parts; it is also the first found to go after plants as a primary food source." Spiders in Costa Rica more frequently supplemented plant food with animal prey items, including ant larvae.

"What surprised us most about discovering this spider's extraordinary ecology was to find it on the ant-acacias," according to Curry. "This well-known mutualism has been studied by tropical ecologists for nearly 50 years, yet the spider's role was not noticed until Olson's discovery in 2001. We were lucky to find in Mexico an area where the spider is both exceptionally abundant and even more herbivorous than in Costa Rica."

The researchers backed up their field observations with the results of laboratory analyses—conducted with the help of co-authors Matthew Reudink and Kurt Kyser of Queens University, Canada—of carbon and nitrogen isotopes for the various components of the ant-acacia system (Beltian bodies, ants, Bagheera spiders) and for other kinds of local spiders. The ratio of 15N to 14N, which provides an indication of a species' trophic position, showed that Bagheera kiplingi was more similar to the herbivorous acacia-ants than to any of the other spiders sampled. Meanwhile, the ratio of 13C to 12C, which generally yields a match between an animal and its food, was almost identical for Bagheera spiders and the Beltian bodies. Collectively, the data show that Bagheera kiplingi obtains most of its diet directly or indirectly from the ant-acacia plants, especially in México.

This research has broader implications, according to Meehan and Curry. It shows that coevolution between an ant and a plant can result in the development of plant structures that may be especially vulnerable to exploitation by third parties, including species such as spiders that normally focus on completely different kinds of prey. Also, Bagheera lives and nests on the acacia plants at very high densities, with hints of males helping to care for eggs and young, another behavior that is virtually unknown among spiders. This suggests that the transition to herbivory in Bagheera may have strongly influenced the species' social evolution, a possibility that the researchers are continuing to study.

Funding for the research was provided by the Animal Behavior Society and Sigma Xi-The Scientific Research Society (student research grants to CJM), by Villanova University, and by the Earthwatch Institute.

Villanova University, a co-educational Roman Catholic institution, was founded by the Order of Saint Augustine in 1842. A premier institution of higher education, Villanova provides a comprehensive education rooted in the liberal arts; a shared commitment to the Augustinian ideals of truth, unity and love; and a community dedicated to service to others. A wide variety of undergraduate and graduate degree programs are offered through the University's four colleges: the College of Liberal Arts and Sciences, the Villanova School of Business, the College of Engineering and the College of Nursing, as well as the Villanova School of Law. With a total enrollment that surpasses 10,000 undergraduate, graduate and law students, Villanova is the oldest and largest Catholic university in the Commonwealth of Pennsylvania.

Herbivory discovered in a spider 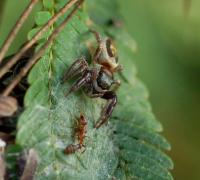