Climate was very much on Genghis Khan's side as he expanded his Mongol Empire across northeastern Asia.

That link between Mongolia's climate and its human history echoes down the centuries, according to findings reported in this week's issue of the journal Proceedings of the National Academy of Sciences (PNAS).

But climate may no longer be the boon it was during the latter, wetter part of Genghis Khan's reign. The early years were marked by drought.

Mongolia's current drought conditions could have serious consequences for the Asia region's human and other inhabitants.

The discovery linking ancient and modern history hinges on wood. Trees provide an extensive climate record in their rings.

The tree rings' tales of ebbs and flows in water availability show that Genghis Khan took power during a severe drought, says Amy Hessl, a geographer at West Virginia University and co-author of the paper.

But, the scientists found, the rapid expansion of Genghis Khan's empire coincided with the wettest period in the region during the last millennium.

"Through a careful analysis of tree-ring records spanning eleven centuries, the researchers have provided valuable information about a period of great significance," says Tom Baerwald, a program director for the National Science Foundation's (NSF) Dynamics of Coupled Natural and Human Systems (CNH) Program, which funded the research.

CNH is one of NSF's Science, Engineering and Education for Sustainability (SEES) programs. CNH is supported by NSF's Directorates for Geosciences; Biological Sciences; and Social, Behavioral & Economic Sciences.

Though political realities would also have played into Genghis Khan's power grab, the regional climate at the time appears to have supported his empire's expansion.

The climate provided literal horsepower as armies and their horses fed off the fertile, rain-fed land.

"Such a strong and unified center would have required a concentration of resources that only higher productivity could have sustained, in a land in which extensive pastoral production does not normally provide surplus resources," the paper states.

While the ramifications for past history are significant, so, too, are they for today's.

The scientists believe that human-caused warming may have exacerbated the current drought in central Mongolia, similar to the drought that coincided with Genghis Khan's initial rise to power.

"If future warming overwhelms increased precipitation, episodic 'heat droughts' and their social, economic and political consequences will likely become more common in Mongolia and Inner Asia," according to the paper.

Hessl co-authored the report with scientists Neil Pederson of the Lamont-Doherty Earth Observatory, Nachin Baatarbileg of the National University of Mongolia, Kevin Anchukaitis of the Woods Hole Oceanographic Institution and Nicola Di Cosmo of the Institute for Advanced Study. 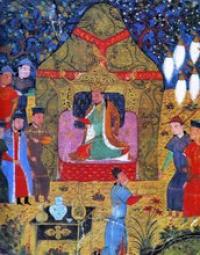 Genghis Khan on the Throne

Tents at the Site in Mongolia