Durham, NC – How does a female penguin choose a mate? Courtship calls help females decide which males are likely to be devoted dads, says a study in the journal Behaviour.

Antarctic penguins come on land for just a few short months each summer to breed and raise their chicks. Raising a family in the coldest place on earth is no small feat. Adelie penguins pull it off by tag-team parenting, the researchers explained. Males and females take turns incubating the eggs and guarding the chicks while their mate forages for food.

Males arrive first to claim a territory and build a nest. When the females arrive, the males serenade prospective mates by throwing their heads back, pointing their beaks to the sky, and emitting a series of hoarse trills and squawks.

"They're not musical calls — they sound like a cross between a donkey and a stalled car," said author Emma Marks of the University of Auckland. Penguin calls may not be music to our ears, but to penguin females they hold clues to a male's paternal potential, Marks and colleagues report.

After choosing a mate the female lays two eggs and returns to sea, leaving the male alone to tend the egg until she returns to take the next shift. For the first two weeks penguin dads do the bulk of babysitting duty without breaking to eat. By relying on stored fat reserves, father penguins can lose more than 20% of their body weight over the course of the summer breeding season, the researchers said.

"It's a pretty arduous task, especially for the males," said Marks. "If a male doesn't have enough fat to last these fasts, he may have to abandon the eggs and go to sea before the female can make it back. So it's imperative that the female pick a male in good condition," she added.

The researchers wanted to know how courtship calls help a penguin female choose the father of her chicks. "We knew that females preferred some males over others. But we didn't know what traits females were using to choose a good mate," said co-author Dianne Brunton of Massey University in New Zealand.

"If she chooses a male with a particular kind of call, does she have a better chance of successfully raising chicks?" Marks asked.

To find out, Marks traveled to Antarctica's remote Ross Island, summer home to half a million Adelie penguins. Over the course of the next three months she weighed dozens of males and recorded their calls with a handheld microphone. She also noted how successful they were at attracting mates and raising chicks.

When the researchers examined the calls, they found that steady frequency over the longest part of the call — an extended chattering in the middle of the male's display — best predicts male buffness and breeding success. "It's as if females are listening to the stability of the call," said Marks.

Males with more consistent pitch were snatched up more quickly. These males were also heavier and more successful at raising chicks, the researchers found. "The fat surrounding the male's voice box changes what his call sounds like," said Brunton. "We don't yet know the physiological mechanism for call production, but body fat appears to stabilize their calls," Marks added.

By listening to male courtship calls, a female can tell how fat a male is and what kind of father he'll be, Brunton explained. Fatter males make better fathers because they have the energy reserves to endure long fasts, so are less likely to leave the nest and desert their chicks.

"A fat male is a good choice for a female because males do so much of the offspring care," said Brunton. "They're able to incubate the eggs for longer and use up their fat stores, while skinny males aren't able to do that."

The researchers also wondered if males were always honest about their potential as caring fathers, or merely bluffing to attract a mate. "What if the guy calls, and it turns out he's a skinny bird pretending to be a fat bird, making himself sound better than he really is?" said Marks.

"Females can't judge how fat a male is just by looking at him," said Brunton. "How fat he looks depends on how he's standing and how fluffed up his feathers are."

A male who lies about his paternal commitment might increase his chances of passing on his genes, said co-author Allen Rodrigo, Director of the National Evolutionary Synthesis Center in Durham, North Carolina. For that reason, females are likely to be on the lookout for the most honest indicators of paternal potential, he explained.

As penguin dads lost weight over the chick-rearing season, their calls changed too, Marks found. "So a skinny male is unlikely to be able to pretend he's a big fat male. He can't fake it," said Marks. 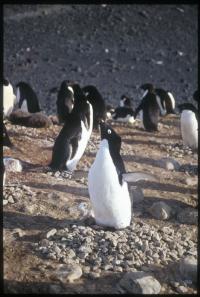