The passenger pigeon is famous for the enormous size of its historical population in North America (estimated at 3 to 5 billion) and for its rapid extinction in the face of mass slaughter by humans. Yet it remains a mystery why the species wasn't able to survive in at least a few small, isolated populations.

One theory, which is consistent with the findings of a new study published November 17 in Science, suggests that passenger pigeons were well adapted to living in huge flocks, but poorly adapted to living in smaller groups, and the change in population size happened so fast they were unable to adapt.

"Passenger pigeons did really well for tens of thousands of years, and then suddenly they went extinct. Paradoxically, their enormous population size may have been a factor in their extinction," said corresponding author Beth Shapiro, professor of ecology and evolutionary biology at UC Santa Cruz.

Shapiro's team looked at the genetic diversity of passenger pigeons, using DNA recovered from museum specimens. The researchers confirmed earlier observations of remarkably low genetic diversity in the passenger pigeon population. But where previous researchers saw evidence of an unstable population that had fluctuated between highs and lows, the new study reached very different conclusions.

"What we did, which the previous study didn't do, was to look at variation in diversity across the genome. We found that it wasn't just lower than expected overall, it was also more variable, and we were able to see where those regions of high and low diversity are in the passenger pigeon genome," said first author Gemma Murray, a postdoctoral researcher in Shapiro's Paleogenomics Lab at UC Santa Cruz.

The analysis revealed patterns in the passenger pigeon genome indicating that the species' low genetic diversity was the result of natural selection causing the rapid spread of beneficial mutations through the population and the elimination of bad mutations. The researchers did not find the same patterns of genetic diversity across the genome in the closely related band-tailed pigeon, which has a relatively small population of about 2 million native to western North America.

When a beneficial mutation spreads through a population, it carries along with it adjacent stretches of DNA, so subsequent generations carry not only the good mutation but entire sections of identical DNA. These regions of low diversity can be broken up by recombination, the process in which paired chromosomes exchange sections of DNA during the formation of eggs and sperm (which explains why parents don't pass on exact copies of their chromosomes to their offspring).

"At the ends of the chromosomes, nothing gets dragged along with the beneficial mutation because of the high rate of recombination," Shapiro explained.

When the researchers looked at what types of genes showed evidence of adaptive evolution, they found many that could be related to aspects of passenger pigeon ecology and the demands of living in large flocks. Among the 32 genes with strong evidence of adaptive evolution were genes associated with the immune system and stress reduction (large, dense populations tend to have a high burden of disease and social stress) and with the ability to eat lots of certain foods.

These findings are consistent with the idea that the passenger pigeon's adaptation to large populations may have become a liability when their population was reduced. "Our findings fit with that story, and we don't find any evidence that the population was unstable before people started to hunt them," Murray said.

The study also has important theoretical implications for population geneticists. Population theory predicts that species with large populations should have greater genetic diversity than those with smaller populations, but this prediction assumes that most of the genome is evolving "neutrally" through genetic drift, accumulating random mutations with neither beneficial nor deleterious effects. Population geneticists often use models that assume neutral evolution to make inferences about a population's history.

"It's a common assumption that if a species has low genetic diversity, it went through a population bottleneck at some time in the past," Murray explained.

But theoretical predictions about the relationship between population size and genetic diversity are not borne out in the real world. This is known as Lewontin's paradox (after evolutionary biologist Richard Lewontin), and according to Shapiro, it may be because natural selection is more efficient in larger populations and can swamp the effects of random changes, making the assumption of neutral evolution invalid.

Natural selection is predicted to have a greater influence on large populations both because strongly beneficial mutations are more likely to arise, and also because in small populations, random events have a greater effect on what gets passed on to the next generation.

Evidence in support of this explanation of Lewontin's paradox was presented in a 2015 paper by Russell Corbett-Detig, assistant professor of biomolecular engineering at UC Santa Cruz and a coauthor of the new paper. The passenger pigeon and the band-tailed pigeon, similar species with very different population sizes, offered a perfect opportunity to test the idea, Shapiro said.

"The interaction between the recombination landscape and the enormous population size of passenger pigeons allows us to see what's behind Lewontin's paradox," Shapiro said. "In most species, it is probably safe to assume the majority of the genome is evolving neutrally, but for species with very large populations we might want to hesitate. These tools that use genetic diversity to make inferences about historical changes in a population's size don't work at all for the passenger pigeon."

This research was supported by the David and Lucile Packard Foundation, Gordon and Betty Moore Foundation, and Revive and Restore. 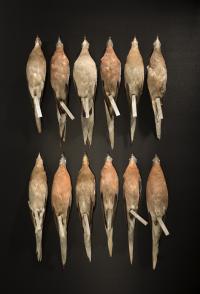 Passenger Pigeons from the Denver Museum of Nature & Science