Cardiovascular disease (CVD) has steadily increased in prevalence to become the number one cause of death worldwide. It is estimated that half of the overall reduction in CVD mortality observed over the past 20 years in western countries could be attributed to appropriate use of CV medications for secondary prevention. However, according to researchers, the lack of adherence to prescribed treatment may be impeding adequate secondary prevention contributing to the CVD pandemic.

This novel FOCUS Study tested the polypill to evaluate post-heart attack patients' adherence to secondary prevention medication. The cost-effective polypill, with a fixed-dose combination of a blood thinner, a cholesterol-lowering drug, and an angiotensin-converting-enzyme inhibitor works to stabilize vessel walls and blood pressure. It contains aspirin (100 mg), simvastatin (40 mg), and ramipril (2.5, 5 or 10 mg). The polypill, named Trinomia, is the creation of Dr. Fuster, in partnership with CNIC in Spain and Ferrer Laboratories.

In the first phase of their research, FOCUS 1, the research team performed a comprehensive multi-country analysis of 2,118 post MI patients living in five different countries (Spain, Italy, Argentina, Brazil, and Paraguay) to assess the socioeconomic, comorbidity, and other factors that determine patient adherence to CV medications. The degree of adherence to prescribed medications was calculated using the Morisky Green Adherence Questionnaire, a self-reported method with four questions on adherence behavior, plus directly measured pill count.

The researchers found an average baseline adherence level of only 45.5 percent. The risk of being non-adherent was consistently associated across the five different countries with younger age, depression, being on a complex medication regimen, poorer health insurance coverage, and a lower level of social support.

The second phase of their research, FOCUS 2, was a randomized controlled clinical trial testing the effect of the fixed-dose combination polypill on patient adherence and control of post heart attack patients' CV risk factors. In this study, a total of 695 patients were enrolled from four countries (Italy, Spain, Argentina, and Paraguay) and followed for a period of 9 months.

According to researchers, the FOCUS 1 Study has identified the reasons that impede appropriate adherence to CV medications in a post MI population from five different countries. While, FOCUS 2 has shown that, compared with the three drugs given separately, the use of a polypill strategy significantly increases self-reported and directly measured medication adherence for secondary prevention following an acute MI. FOCUS 2 research is ongoing and will assess whether there are any differences between the two treatment arms, safety, and costs.

"Our results suggest that the polypill has the potential to prevent more patients having a second heart attack," says Dr. Fuster. "A randomized trial is underdevelopment to test whether the improved adherence with the polypill found in FOCUS results in fewer post MI patients having another MI."

The Mount Sinai Health System is an integrated health system committed to providing distinguished care, conducting transformative research, and advancing biomedical education. Structured around seven member hospital campuses and a single medical school, the Health System has an extensive ambulatory network and a range of inpatient and outpatient services—from community based facilities to tertiary and quaternary care.

The System includes approximately 6,600 primary and specialty care physicians, 12 minority owned free standing ambulatory surgery centers, over 45 ambulatory practices throughout the five boroughs of New York City, Westchester, and Long Island, as well as 31 affiliated community health centers. Physicians are affiliated with the Icahn School of Medicine at Mount Sinai, which is ranked among the top 20 medical schools both in National Institutes of Health funding and by U.S. News & World Report. 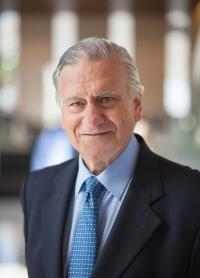