CAMBRIDGE, Mass. – Chemists and engineers at Harvard University have fashioned nanowires into a new type of V-shaped transistor small enough to be used for sensitive probing of the interior of cells.

The new device, described this week in the journal Science, is smaller than many viruses and about one-hundredth the width of the probes now used to take cellular measurements, which can be nearly as large as the cells themselves. Its slenderness is a marked improvement over these bulkier probes, which can damage cells upon insertion, reducing the accuracy or reliability of any data gained.

"Our use of these nanoscale field-effect transistors, or nanoFETs, represents the first totally new approach to intracellular studies in decades, as well as the first measurement of the inside of a cell with a semiconductor device," says senior author Charles M. Lieber, the Mark Hyman, Jr. Professor of Chemistry at Harvard. "The nanoFETs are the first new electrical measurement tool for intracellular studies since the 1960s, during which time electronics have advanced considerably."

Lieber and colleagues say nanoFETs could be used to measure ion flux or electrical signals in cells, particularly neurons. The devices could also be fitted with receptors or ligands to probe for the presence of individual biochemicals within a cell.

Aside from their small size, two features allow for easy insertion of nanoFETs into cells. First, Lieber and colleagues found that by coating the structures with a phospholipid bilayer – the same material cell membranes are made of – the devices are easily pulled into a cell via membrane fusion, a process related to that used to engulf viruses and bacteria.

"This eliminates the need to push the nanoFETs into a cell, since they are essentially fused with the cell membrane by the cell's own machinery," Lieber says. "This also means insertion of nanoFETs is not nearly as traumatic to the cell as current electrical probes. We found that nanoFETs can be inserted and removed from a cell multiple times without any discernible damage to the cell. We can even use them to measure continu-ously as the device enters and exits the cell."

Secondly, the current paper builds upon previous work by Lieber's group to introduce triangular "stereocenters" – essentially, fixed 120º joints – into nanowires, structures that had previously been rigidly linear. These stereocenters, analogous to the chemical hubs found in many complex organic molecules, introduce kinks into 1-D nanostructures, transforming them into more complex forms.

Lieber and his co-authors found that introducing two 120º angles into a nanowire in the proper cis orientation creates a single V-shaped 60º angle, perfect for a two-pronged nanoFET with a sensor at the tip of the V. The two arms can then be connected to wires to create a current through the nanoscale transistor.

Lieber's co-authors on the Science paper are Bozhi Tian, Tzahi Cohen-Karni, Quan Qing, Xiaojie Duan, and Ping Xie, all of Harvard's Department of Chemistry and Chemical Biology and School of Engineering and Applied Sciences. The work was sponsored by the National Institutes of Health and the McKnight Foundation for Neuroscience. 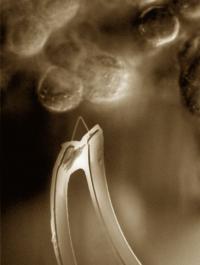 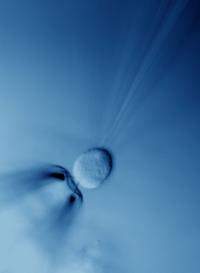