WASHINGTON D.C., March 30, 2015 - Plants living in arid, mountainous and humid regions of the planet often rely on their leaves to obtain the moisture they need for survival by pulling mist out of the air. But how exactly they manage this feat has been a bit of a mystery--until now.

By studying the morphology and physiology of plants with tiny conical "hairs" or microfibers on the surface of their leaves, such as tomatoes, balsam pears and the flowers Berkheya purpea and Lychnis sieboldii, a team of researchers in Japan uncovered water collection-and-release secrets that may, in turn, one day soon "bioinspire" a technology to pull fresh water from the air to help alleviate global water shortages.

As the team reports in a story appearing on this week's cover of the journal Applied Physics Letters, from AIP Publishing, they examined Lychnis sieboldii in detail and discovered a unique water collection-and-release feature: cone-shaped hairs with inner microfibers reversibly transform to crushed plates that "twist" perpendicularly in dry conditions.

"We zeroed in on the microstructure of the plants via advanced electron microscope technology and recorded the dynamic changes involved in the water collection process in the form of a movie," explained Professor Shigeru Yamanaka, who is on the Faculty of Textile Science and Technology at Shinshu University.

What did this reveal? Microfibers found within the hairs appear to be responsible for both water storage and release. Depending on the moisture level in the air, when needed, water stored during wet conditions gets released onto the leaf in dry conditions.

At room temperature, Lychnis sieboldii hairs showed changes in their morphology depending on exposure to water. In a wet state, the hairs became cone-shaped immediately after a water droplet adhered to it. After drying, the cone shapes morphed into a perpendicularly twisted structure at a 90° angle. But when a droplet of water was placed on the hairs they reverted back to their initial cone shape, which may be a "shape memory" effect.

The team tapped simulations to help explain the formation of the twisted structure, which they believe "adds increased mechanical strength to the hairs." Similar phenomena were found in the other plants with "hairy" leaves.

"Under dry conditions, the hairs also twisted in a similar manner," said Yamanaka. "They converted to a cone shape, just like Lychnis sieboldii, when exposed to water droplets--suggesting that this strategy of water control is common among plants with similar hairs on their leaves' surfaces."

How might these findings one day help alleviate the world's water shortage? "These plants give us great ideas worth mimicking," noted Yamanaka. "Advanced fiber technology can be used to 'replicate' the plant hair's fiber 'net structure' and enable the development of an apparatus capable of collecting water from the air in arid regions of the world."

The article, "Mechanics of Water Collection in Plants via Morphology Change of Conical Hairs," is authored by Fuya Ito, Satoshi Komatsubara, Naoki Shigezawa, Hideaki Morikawa, Yasushi Murakami, Katsumi Yoshino and Shigeru Yamanaka. It appears in the journal Applied Physics Letters on March 30, 2015 (DOI: 10.1063/1.4916213). After that date, it can be accessed at: http://scitation.aip.org/content/aip/journal/apl/106/13/10.1063/1.4916213

Authors of this study are affiliated with Shinshu University and the Shimane Institute for Industrial Technology. 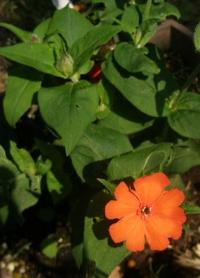