Earth observation scientists at the University of Leicester have recorded stunning images of the UK's winter landscape by orbiting satellites.

European Space Agency satellite instruments have been observing the icy blast in the UK from their vantage points in space.

Leicester scientists have used two instruments, MERIS and AATSR, which have returned stunning images of a snow-bound UK from observations on November 29th and December 1st.

In the MERIS images, the colour scale runs from white snow and clouds to green vegetation. In the AATSR images, the non-snow areas are coloured red to highlight differences to the white snow. The change in snow cover within two days is clearly visible.

The AATSR instrument has been funded in the UK by the Department for Energy and Climate Change, and is a centrepiece of a new exhibition at the Science Museum, entitled 'Atmosphere ... exploring climate science'. The exhibition was formally opened by HRH Prince Charles today, December 3rd, and will be open to the public from tomorrow (December 4th).

Professor John Remedios, Head of Earth Observation Science at the University of Leicester, said "These images demonstrate how much our local climate depends on a combination of the climate mean temperature in a given month and the meteorological variability which can produce very cold and very warm months. For the UK, it is another cold winter. At one time a few years ago our children complained that there was never any snow. Now there is plenty!"

He added "Each year we need to make careful observations in order to increase the accuracy of the weather prediction. The AATSR instrument is both very good at measurements for climate and for weather forecasting"

The AATSR instrument is flown on the European Space Agency (ESA) satellite, Envisat, launched in 2002, alongside ESA's MERIS instrument. The AATSR measures fundamental climate variables such as sea and land surface temperature, aerosols and clouds whilst the MERIS instrument is able to observe vegetation greenness and ocean colour, and their change over the seasons. The Envisat recently underwent a controlled orbit change to extend its lifetime to 2013. The images show that the instruments are working very well. 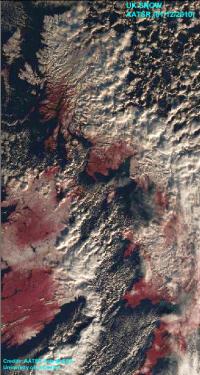 Image by AATSR on Dec. 1

Image by MERIS on Dec. 1