When Ken Hess was in ninth grade, he was lucky. His teacher wanted him to do a science project, and he knew exactly what it would be. He talked his dentist into letting him come to the dental office on Saturdays, when it was closed, so Hess could use the X-ray machine to bombard various objects with radiation, observing the results with a "cloud chamber" he had built. The young Hess's research involved observing the trails made by radioactive particles traveling through the chamber.

Not only is it true that few dentists would allow such use of their X-ray machines, but it's fair to say that not every student is like Hess. Many students agonize over finding ideas for science projects, and some are unaware that topics that could be of great interest to them even exist.

Fortunately, years later, Hess founded the Science Buddies Web site, which guides students to science and engineering topics that appeal to their interests. Because of its effectiveness as a tool in informal science education, the journal Science has selected the site to win the Science Prize for Online Resources in Education.

Science magazine developed the Science Prize for Online Resources in Education (SPORE) to promote the best online materials in science education. The acronym SPORE suggests a reproductive element adapted to develop, often in less-than-ideal conditions, into something new. In the same way, these winning projects can be the seed of progress in science education, despite considerable challenges to educational innovation. Science publishes an article by each recipient of the award, which explains the winning project. The article about Science Buddies will be published on April 29.

"We want to recognize innovators in science education," says Bruce Alberts, editor-in-chief of Science. "At the same time, this competition will promote those Web sites with the most potential to benefit science students and teachers. The publication of an article in Science on each winning site will help guide everyone to important online resources, thereby promoting science literacy."

Science Buddies began about ten years ago when Hess, while watching his daughter win an award for a science project, found himself wondering how he could help "students who didn't have an engineer as a father" to do better science projects. At the time, Hess was writing a book, having just sold a software company, Banner Blue Software.

Providing the seed money himself, Hess created a Science Buddies Web site that initially focused on mentorship. Also on the site were online tools that helped students refine and explore their interests in science. As it turned out, "the tools themselves were what people were looking for," Hess says, so the site was revamped.

Hess and his colleagues emphasize that they have approached the site like a business. They assess what users need when they come to the site and try their best to provide it. So far, that formula has been very successful, and last year alone, 9.8 million unique individuals visited the site. Although Hess attributes some of that success to "a generous grant" from Google that allows Science Buddies to advertise on the search engine's site, as well as search engine optimization and teachers' directing their students to Science Buddies, he says "it still has mostly to do with there being a need for high-quality information. Kids are like adults. They have a problem, they want a solution. They want an answer to their question as quickly as possible."

Science Buddies' Topic Selection Wizard (TSW) helps students quickly find a science project topic of interest. The TSW asks each student 26 questions: Do you enjoy learning about lakes, rivers, the ocean, and beaches? Are you interested in science-fiction stories involving faster-than-light travel and "beams" that do amazing things? Do you enjoy taking extra time to make something look just right or even beautiful?

Like the recommender systems used to suggest items to purchase on e-commerce websites, Science Buddies can predict topics of interest based on a student's responses. "We think we're a little more accurate than other systems," Hess says, "because with 26 questions, we've got a lot of data."

Once students pick a project, the site provides scientist-vetted information, including a short introduction, the expected duration and cost of a project, concepts and important terms a student should learn, a step-by-step procedure developed according to the student's grade level and the nature of the experiment, and a material and equipment list. At least one of the projects suggested for a third-grader calls for a DS, a portable game console that is popular with that age group, to be used to conduct cognitive tests as part of the project.

The projects are broken up into chunks, giving students what is often their first look at project management. Also offered is information that goes beyond the science involved -- how to do background research, how to cite sources, and how to write a bibliography.

Students with specific questions about their projects or area of interest can go to the site's Ask an Expert online bulletin board, where science and engineering professionals who have undergone background checks volunteer to answer questions in a public, moderated forum. Many of these exchanges involve only one or two postings, but some blossom into mentoring relationships. Such was the case with high school student Christina Wang. With the help of Science Buddies volunteers, and particularly Donna Hardy from Bio-Rad Laboratories, Christina went from knowing virtually nothing about biotechnology to developing a screen for detecting biofilm-inhibiting metabolites in four bacteria species. Her project won a second-place Grand Award at the 2010 Intel International Science and Engineering Fair.

Scientists often bring their current research to Science Buddies, not only to get students interested in it, but also to increase its exposure. Individual project ideas on the site average 14,000 unique visitors every year. "Many scientists are very interested in reaching out and letting people know what they're doing," Hess says. In some cases, the current research topics are outlined so that students can conduct their own cutting-edge research. An example is a research project out of MIT called "From Water to Fuel to Water: The Fuel Cycle of the Future," which allows students to explore new catalysts for splitting water as a renewable energy technology.

Science Buddies, which is currently funded by corporations, foundations, and private individuals, will continue its science project focus, and may branch out by offering science information for other occasions where there is a strong need. In the meantime, Hess hopes that the site's SPORE award and article in Science will encourage more participation by professional scientists and engineers.

"The people we want are the people who are reading Science," Hess says.

To visit the Science Buddies Web site, go to www.sciencebuddies.org. 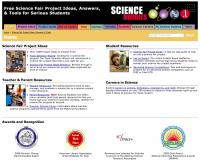 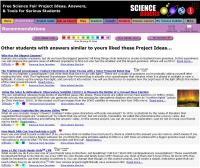