Most flowering plants depend on pollinators such as bees to transfer pollen from the male anthers of one flower to the female stigma of another flower, enabling fertilization and the production of fruits and seeds. Bee pollination, however, involves an inherent conflict of interest, because bees are only interested in pollen as a food source.

"The bee and the plant have different goals, so plants have evolved ways to optimize the behavior of bees to maximize the transfer of pollen between flowers," explained Kathleen Kay, associate professor of ecology and evolutionary biology at UC Santa Cruz.

In a study published December 23 in Proceedings of the Royal Society B, Kay's team described a pollination strategy involving flowers with two distinct sets of anthers that differ in color, size, and position. Darwin was mystified by such flowers, lamenting in a letter that he had "wasted enormous effort over them, and cannot yet get a glimpse of the meaning of the parts."

For years, the only explanation put forth for this phenomenon, called heteranthery, was that one set of anthers is specialized for attracting and feeding bees, while a less conspicuous set of anthers surreptitiously dusts them with pollen for transfer to another flower. This "division of labor" hypothesis has been tested in various species, and although it does seem to apply in a few cases, many studies have failed to confirm it.

The new study proposes a different explanation and shows how it works in species of wildflowers in the genus Clarkia. Through a variety of greenhouse and field experiments, Kay's team showed that heteranthery in Clarkia is a way for flowers to gradually present their pollen to bees over multiple visits.

"What's happening is the anthers open at different times, so the plant is doling out pollen to the bees gradually," Kay said.

This "pollen dosing" strategy is a way of getting the bees to move on to another flower without stopping to groom the pollen off their bodies and pack it away for delivery to their nest. Bees are highly specialized for pollen feeding, with hairs on their bodies that attract pollen electrostatically, stiff hairs on their legs for grooming, and structures for storing pollen on their legs or bodies.

"If a flower doses a bee with a ton of pollen, the bee is in pollen heaven and it will start grooming and then go off to feed its offspring without visiting another flower," Kay said. "So plants have different mechanisms for doling out pollen gradually. In this case, the flower is hiding some anthers and gradually revealing them to pollinators, and that limits how much pollen a bee can remove in each visit."

There are about 41 species of Clarkia in California, and about half of them have two types of anthers. These tend to be pollinated by specialized species of native solitary bees. Kay's team focused on bee pollination in two species of Clarkia, C. unguiculata (elegant clarkia) and C. cylindrica (speckled clarkia).

In these and other heterantherous clarkias, an inner whorl of anthers stands erect in the center of the flower, is visually conspicuous, and matures early, releasing its pollen first. An inconspicuous outer whorl lies back against the petals until after the inner anthers have opened. The outer anthers then move toward the center of the flower and begin to release their pollen gradually. A few days later, the stigma becomes erect and sticky, ready to receive pollen from another flower.

"In the field, you can see flowers in different stages, and using time-lapse photography we could see the whole sequence of events in individual flowers," Kay said.

The division of labor hypothesis requires both sets of anthers to be producing pollen at the same time. Kay said she decided to investigate heteranthery after observing clarkia flowers at a field site and realizing that explanation didn't fit. "I could see some flowers where one set was active, and some where the other set was active, but no flowers where both were active at the same time," she said.

In C. cylindrica, the two sets of anthers produce pollen with different colors, which enabled the researchers to track where it was going. Their experiments showed that pollen from both sets of anthers was collected for food and was also being transferred between flowers, contradicting the division of labor hypothesis.

"The color difference was convenient, because otherwise it's very hard to track pollen," Kay said. "We showed that bees are collecting and transporting pollen from both kinds of anthers, so they are not specialized for different functions."

Kay said she didn't realize how much time Darwin had spent puzzling over heteranthery until she started studying it herself. "He figured out so many things, it's hard to find a case where he didn't figure it out," she said. Darwin might have been on the right track, though. Shortly before his death, he requested seeds of C. unguiculata to use in experiments.

In addition to Kay, the coauthors of the paper include postdoctoral scholar Tania Jogesh and two UCSC undergraduates, Diana Tataru and Sami Akiba. Both students completed senior theses on their work and were supported by UCSC's Norris Center for Natural History. 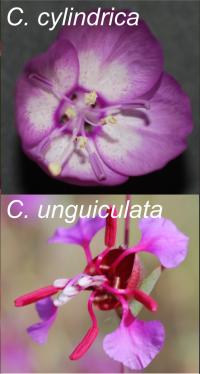