For more than a century, scientists have understood the basics of inheritance: if good genes help parents survive and reproduce, the parents pass those genes along to their offspring. And yet, recent research has shown that reality is much more complex: genes can be switched off, or silenced, in response to the environment or other factors, and sometimes these changes can be passed from one generation to the next.

The phenomenon has been called epigenetic inheritance, but it is not well understood. Now, UMD geneticist Antony Jose and two of his graduate students are the first to figure out a specific mechanism by which a parent can pass silenced genes to its offspring. Importantly, the team found that this silencing could persist for multiple generations--more than 25, in the case of this study.

The research, which was published in the Feb. 2, 2015 online early edition of the Proceedings of the National Academy of Sciences, could transform our understanding of animal evolution. Further, it might one day help in the design of treatments for a broad range of genetic diseases.

"For a long time, biologists have wanted to know how information from the environment sometimes gets transmitted to the next generation," said Jose, an assistant professor in the UMD Department of Cell Biology and Molecular Genetics. "This is the first mechanistic demonstration of how this could happen. It's a level of organization that we didn't know existed in animals before."

Jose and graduate students Sindhuja Devanapally and Snusha Ravikumar worked with the roundworm Caenorhabditis elegans, a species commonly used in lab experiments. They made the worms' nerve cells produce molecules of double-stranded RNA (dsRNA) that match a specific gene. (RNA is a close relative of DNA, and has many different varieties, including dsRNA.) Molecules of dsRNA are known to travel between body cells (any cell in the body except germ cells, which make egg or sperm cells) and can silence genes when their sequence matches up with the corresponding section of a cell's DNA.

The team's biggest finding was that dsRNA can travel from body cells into germ cells and silence genes within the germ cells. Even more surprising, the silencing can stick around for more than 25 generations. If this same mechanism exists in other animals--possibly including humans--it could mean that there is a completely different way for a species to evolve in response to its environment.

"This mechanism gives an animal a tool to evolve much faster," Jose said. "We still need to figure out whether this tool is actually used in this way, but it is at least possible. If animals use this RNA transport to adapt, it would mean a new understanding of how evolution happens."

The long-term stability of the silencing effect could prove critical in developing treatments for genetic diseases. The key is a process known as RNA interference, more commonly referred to as RNAi. This process is how dsRNA silences genes in a cell. The same process has been studied as a potential genetic therapy for more than a decade, because you can target any disease gene with matching dsRNA. But a main obstacle has been achieving stable silencing, so that the patient does not need to take repeated high doses of dsRNA.

"RNAi is very promising as a therapy, but the efficacy of the treatment declines over time with each new cell division," Jose said. "This particular dsRNA, from C. elegans nerve cells, might have some chemical modifications that allow stable silencing to persist for many generations. Further study of this molecule could help solve the efficacy problem in RNAi therapy."

Jose acknowledges the large gap between roundworms and humans. Unlike simpler animals, mammals have known mechanisms that reprogram silenced genes every generation. On the surface, it would seem as though this would prevent epigenetic inheritance from happening. And yet, previous evidence suggests that the environment may be able to cause some sort of transgenerational effect in mammals as well. Jose believes that his team's work provides a promising lead in the search for how this happens.

"This is a fertile research field that will keep us busy for 10 years or more into the future," Jose said. "The goal is to achieve a very clear understanding--in simple terms--of all the tools an animal can use to evolve."

The research paper, "Double-stranded RNA made in C. elegans neurons can enter the germline and cause transgenerational gene silencing," Sindhuja Devanapally, Snusha Ravikumar and Antony M. Jose, was published online in the Feb. 2, 2015 early edition of the journal Proceedings of the National Academy of Sciences.

About the College of Computer, Mathematical, and Natural Sciences? 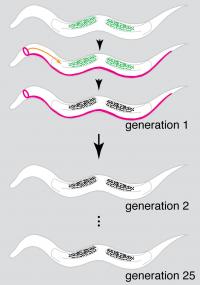