New research has found that the 6 gram brown thornbill mimics the hawk alarm calls of neighbouring species to scare a nest predator by convincing it that a much bigger and scarier predator - the brown goshawk - is on its way.

Currawongs, which raid the nests and hunt the chicks of thornbills, are also prey to goshawks. Although currawongs normally benefit from listening in on hawk alarm calls of other species, thornbills exploit this and turn it against them.

As well as issuing their own hawk alarm call, thornbills mimic those of the local species to create the impression of an impending hawk attack, which in turn distracts the pied currawong - a predator 40 times larger than the thornbill - providing thornbill nestlings with an opportunity to escape.

While animals often mimic dangerous or toxic species to deter predators, the thornbill is a surprising example of a species mimicking another harmless species to trick a predator.

The research, conducted by scientists at the University of Cambridge and the Australian National University (ANU), is published today in the journal Proceedings of the Royal Society B.

"The enormous size difference between a tiny thornbill and a 0.5kg goshawk might make it difficult for thornbills to mimic hawk vocalisations accurately, limiting them to mimicking the chorus of hawk alarm calls given by small local species instead," said Jessica McLachlan, a PhD student from Cambridge's Department of Zoology, who co-authored the study.

"As hawks are silent when hunting, the alarm calls of local species may be the only sound that warns of a hawk's presence," she said.

The researchers studied the thornbills and currawongs living in and around the Australian National Botanic Gardens in Canberra. They devised a series of experiments in which they placed stuffed currawongs in front of thornbill nests to test when thornbills use such trickery, followed by experiments testing how currawongs respond to the calls of thornbills.

They found that thornbills used their own and mimicked hawk alarm calls when their nests are under attack. They also found that currawongs delayed attacks for twice as long when mimetic and non-mimetic alarm calls were played together as opposed to non-mimetic calls played alone.

"Distracting a currawong attacking the nest could give older thornbill nestlings a chance to escape and hide in the surrounding vegetation," said Dr Branislav Igic from ANU, who led the study.

"It's perhaps the thornbills best nest defence in this circumstance because physical attacks on the much larger currawong are hopeless," Igic said.

Birds 'cry hawk' to give offspring chance to escape predators 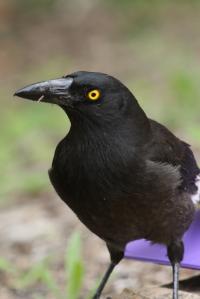