WOODS HOLE, Mass. --The COVID-19 pandemic is a stark reminder that we move through a world shaped by unseen life. Bacteria, viruses, and other microscopic organisms regulate the Earth's vital functions and resources, from the air we breathe to all our food and most of our energy sources. An estimated one-third of the Earth's microbes are literally hidden, buried in sediments deep below the ocean floor. Now, scientists have shown that these "deep biosphere" microbes aren't staying put but are bubbling up to the ocean floor along with fluids from buried petroleum reservoirs. These hitchhikers in petroleum seeps are diversifying the microbial community that thrives at the seafloor, impacting deep-sea processes, such as carbon cycling, that have global implications.

"This study confirms that petroleum seeps are a conduit for transporting life from the deep biosphere to the seafloor," says co-author Emil Ruff, a scientist at the Marine Biological Laboratory (MBL), Woods Hole. The study, led by Anirban Chakraborty and Casey Hubert of the University of Calgary, is published this week in Proceedings of the National Academy of Sciences.

The team analyzed 172 seafloor sediment samples from the eastern Gulf of Mexico that had been collected as part of a 2011 survey for the oil industry. A fraction of these samples contained migrated gaseous hydrocarbons, the chief components of oil and gas. These petroleum seeps on the ocean floor harbored distinct microbial communities featuring bacteria and archaea that are well-known inhabitants of deep biosphere sediments.

"Whereas sedimentation slowly buries microbial communities into the deep biosphere, these results show that it's more of a two-way street. The microbes coming back up offer a window to life buried deeper below," Hubert says. "These relatively accessible surface sediments give us a glimpse into the vast, subsurface realm."

The study also adds a new dimension to understanding the metabolic diversity of seabed petroleum seep microbial communities. "If it weren't for the microbes living at hydrocarbon seeps, the oceans would be full of gas and oil," Chakraborty says.

Co-authors Bernie Bernard and James Brooks of TDI-Brooks International obtained the 172 Gulf of Mexico sediment cores and performed geochemical testing on them, setting the stage for microbiology testing at the University of Calgary.

"One of the strengths of this study is the large number of samples analyzed, allowing robust statistical inferences of the microbes present in the petroleum seeps," Ruff says. Because the seafloor is so difficult to access, explorations of deep-sea ecosystems are often limited by the number and quality of samples. The team used metagenomic approaches to determine what microbes were present in the sediment samples, and genome sequencing of particularly interesting organisms to indicate what their activity in the subsurface might be.

Window to another world: Life is bubbling up to seafloor with petroleum from deep below 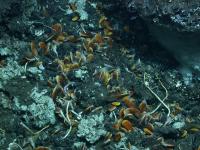 Clams and Shrimp on Petroleum seep in Gulf of Mexico 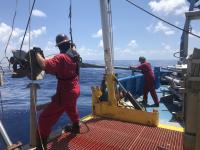