More than a half century after claims that a new frog species existed in New York and New Jersey were dismissed, a Rutgers researcher and team of scientists have proven that the frog is living in wetlands from Connecticut to North Carolina and are naming it after the ecologist who first noticed it.

"Even though he was clearly on to something, the claim Carl Kauffeld made in his 1937 paper fell short," said Rutgers doctoral candidate Jeremy Feinberg. "We had the benefits of genetic testing and bioacoustic analysis that simply weren't available to Kauffeld to prove that even though this frog might look like the two other leopard frogs in the area, it was actually a third and completely separate species."

In the paper, Cryptic Diversity in Metropolis: Confirmation of a New Leopard Frog Species from New York City and Surrounding Atlantic Coast Regions, published in PLOS ONE, Feinberg and a team of seven other researchers revealed the scientific name for the new species: Rana kauffeldi. The leopard frog, first encountered by Feinberg on Staten Island six years ago not far from the Statue of Liberty, will be commonly referred to as the Atlantic Coast Leopard Frog.

During his career, Kauffeld, who died in 1974 at age 63, worked as the director of the Staten Island Zoo and at the American Museum of Natural History, wrote many books about amphibians and reptiles and is considered to have been an authority on the subject. Although Kauffeld's research was initially recognized by some of his colleagues, Feinberg said Kauffeld faced considerable scrutiny and failed to gain any lasting support for his proposal.

"After some discussion, we agreed that it just seemed right to name the species after Carl Kauffeld," said Feinberg. "We wanted to acknowledge his work and give credit where we believe it was due even though it was nearly 80 years after the fact."

Feinberg, the lead author, encountered the new species six years ago in one of the most developed, heavily populated areas in the world. Two years ago, he and scientists from Rutgers, UCLA, UC Davis, and The University of Alabama – who had worked together to show that this frog was a brand new species – made the initial announcement.

Today, the new research paper, which also includes Joanna Burger, professor in the Department of Cell Biology and Neuroscience in the School of Arts and Sciences, as well as scientists from Yale, Louisiana State University, SUNY College of Environmental Science and Forestry, and the New Jersey Division of Fish and Wildlife, completes that discovery. The paper has provided the critical evidence needed to formally describe and name the new frog and also presents information on the distribution, ecology, and conservation status of this species.

Historically, the new frog was confused with two closely related species -- including one to the north and one to the south -- because it looks so similar. As a result, it was not noticed as a distinct species. But after Feinberg's encounter in 2008, modern technology stepped in. Using molecular and bioacoustic techniques to examine the genetics and mating calls of leopard frogs from various parts of Northeast the scientists were able to positively determine that the frog found living in the marshes of Staten Island was, in fact, a new species that might also be hiding in ponds and wetlands beyond New York and New Jersey.

The news, Feinberg said, became a call to arms to biologists, hobbyists and frog enthusiasts from Massachusetts to Virginia to go out, look, and listen in order to determine if the new frog – mint-gray to light olive green with medium to dark spots -- could be found beyond the New York metropolitan area.

Over the last two years, many frog lovers, including some involved with the North American Amphibian Monitoring Project -- a government project that observes frog habitats to determine if populations are declining – have provided crucial information about where the frogs are living, what they look like and how they sound. One volunteer, in fact, noticed the new species' unusual and distinct 'chuck' call, and provided information that ultimately helped confirm populations of the new species in both Virginia and North Carolina.

"If there is a single lesson to take from this study, it's that those who love nature and want to conserve it need to shut down their computers, get outside and study the plants and animals in their own backyards," said co-author Brad Shaffer, professor in UCLA's Department of Ecology and Evolutionary Biology, who described the discovery as biological detective work. Although fun and satisfying work, the goal is to protect the biodiversity of the planet, he said.

Scientists say the fact that this new species – which brings the total number of leopard frogs in the world to 19 – remained under the radar in a highly populated area spanning eight east coast states and several major North American cities stretching 485 miles – is remarkable.

"It is incredible and exciting that a new species of frog could be hiding in plain sight in New York City and existing from Connecticut to North Carolina," said Burger, Feinberg's advisor. "The process of recognizing, identifying and documenting a new species is long and arduous but it is important for our understanding of the wide ranging wildlife in urban as well as other environments." 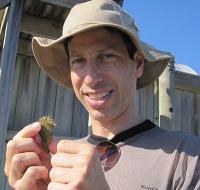