For decades, astronomers have found distant galaxies by detecting the characteristic way their gas absorbs light from a bright quasar in the background. But efforts to observe the light emitted by these same galaxies have mostly been unsuccessful. Now, a team of astronomers using the Atacama Large Millimeter Array (ALMA) in Chile has observed emissions from two distant galaxies initially detected by their quasar absorption signatures, and the results were not what they had expected.

For one thing, emissions driven by star-formation in the galaxies were separated by a surprising distance from the dense gas revealed by quasar absorption, indicating that the galaxies are embedded in an extended halo of hydrogen gas. The estimated star formation rates were also unexpectedly high.

"We had expected we would see faint emissions right on top of the quasar, and instead we saw bright galaxies at large separations from the quasar," said J. Xavier Prochaska, professor of astronomy and astrophysics at UC Santa Cruz and coauthor of a paper on the new findings published March 24 in Science.

The neutral hydrogen gas revealed by its absorption of quasar light is most likely part of a large halo or extended disk of gas around the galaxy, said first author Marcel Neeleman, a postdoctoral fellow at UC Santa Cruz. "It's not where the star formation is, and to see so much gas that far from the star-forming region means there is a large amount of neutral hydrogen around the galaxy," Neeleman said. "We don't know if it's in a large, extended disk of gas that's falling in, or if it's just a really dense halo of gas around the galaxy."

The emission spectrum from one of the galaxies does indicate the presence of a rotating disk, Prochaska noted. "These galaxies appear to be massive, dusty, and rapidly star-forming systems, with large, extended layers of gas," he said. "These observations give us terrific insight into how galaxies like our Milky Way looked 13 billion years ago."

For Prochaska, the paper represents the culmination of a quest he began in 2003 with his Ph.D. advisor at UC San Diego, the late Arthur M. Wolfe (also a coauthor on the paper). Wolfe pioneered the use of quasar spectra to study concentrations of neutral hydrogen gas in the distant universe, known as damped Lyman-alpha (DLA) systems due to the characteristic absorption features the hydrogen gas imprints on the light from the background quasar. Wolfe also saw the potential for ALMA to detect emissions from these systems long before the radio observatory's completion in 2011.

"We've been wanting to do this for 14 years," Prochaska said. "The 'holy grail' has been to identify and study the galaxies that host the hydrogen gas we see in quasar spectra, and it took a facility with ALMA's capability to do it."

The researchers used ALMA to look for far-infrared emission signatures from the galaxies that they knew could be distinguished from the bright light of the quasars. Ionized carbon emits a bright spectral line at a characteristic wavelength in the infrared (158 microns), which astronomers can use as a tracer of galactic structure in the distant universe. The researchers also observed emissions from dust in the far infrared, which allowed them to estimate star formation rates.

ALMA's configurable array of radio antennae enabled the astronomers to focus their search for galaxy emissions in the area around each of two DLAs, located at a distance of about 13 billion light years. From that distance, the light now reaching telescopes gives astronomers a glimpse at an early stage of galaxy formation, about 1 billion years after the big bang.

"This is the epoch when galaxies were really starting to take off in terms of star formation--sort of an adolescent growth spurt before reaching the peak of star formation about 2 billion years later," Prochaska said.

According to Neeleman, astronomers have assumed that detecting light emitted by the galaxies that host DLAs is difficult because it is hidden in the intense light from the background quasars. Given the large separation of these galaxies from their associated quasars, however, it may be that they are instead obscured by dust, he said. With ALMA, the researchers were able to detect the starlight absorbed and reradiated at longer wavelengths by the dust.

Prochaska said he looks forward to obtaining similar observations of a much larger sample of galaxies over the next few years.

In addition to Neeleman, Prochaska, and Wolfe, the coauthors include Nissim Kanekar at the National Center for Radio Astrophysics in India; Marc Rafelski at the Space Telescope Science Institute in Baltimore; and Chris Carilli at the National Radio Astronomy Observatory in Socorro, New Mexico. This research was supported by the National Science Foundation. 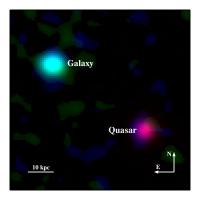 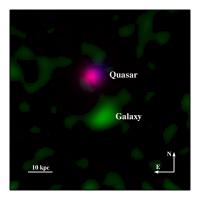