Scientists at the University of Groningen have trained an Artificial Intelligence system to recognize a specific pattern in skin biopsies of patients with the blistering disease epidermolysis bullosa acquisita. The pattern is characteristic of a specific variant of the disease which can cause scarring of the skin and mucous membranes and may lead to blindness. The new system is easy to use and is better than most doctors in making the diagnosis. A description of this AI system is published in the American Journal of Pathology.

In patients with epidermolysis bullosa, layers of the skin get detached, causing large blisters. There are different forms of blistering diseases affecting different layers of the skin. One of these, epidermolysis bullosa acquisita (EBA), is an autoimmune disease through which a patient's own antibodies attack the skin. It usually starts around middle age and the blisters can form scars. Scarring on the skin may lead to limiting the movement of joints but scars can also form in mucous membranes. When this happens in the eye, for example, it may lead to blindness. Early diagnosis is required to prevent the damage caused by scarring.

'At the moment, it can take months to years before the diagnosis of EBA is confirmed', explains Joost Meijer, a dermatologist at the University Medical Center Groningen and joint first author of the paper. Diagnosing EBA happens through skin biopsies, where fluorescent markers attach to the autoantibodies in the basal layer of the epidermis. This produces a serrated U-shaped pattern, typical for EBA. 'However, you need to find and recognize this pattern in a relatively large microscopic slide', Meijer continues. The pattern may only be present in small parts of the slide. To give an idea of how small it is, if the microscopic image is digitized as a picture of 20,000 x 12,000 pixels, the pattern could only take up a 30 x 30 pixel space.

Meijer wrote his Master's thesis on diagnostic techniques to recognize this pattern. He then went on to study the problem in his PhD research, in which he teamed up with fellow PhD student Astone Shi at the University of Groningen's Bernoulli Institute for Mathematics, Computer Science and Artificial Intelligence. Shi, the other joint first author of the paper, works with Convoluted Neural Networks (CNNs), a type of system that works with deep learning and is particularly suited for pattern recognition.

'One challenge was that there is no standard training program for this particular pattern', says Shi. He had to find the best type of CNN and the best way to train it. 'There are millions of parameters in these neural networks, and we had to find the ones that work best.' Another problem is finding data with which to train the CNN. Patients with EBA are rare; at the moment, there are only around 5 to 10 patients diagnosed per year in the Netherlands. Meijer and Shi were able to use biopsies from 46 patients; 42 to train the networks and the remaining four to validate the system.

After training nine different CNNs and repeating the procedure 10 times, the AI system was able to recognize EBA with both specificity and sensitivity equal to 89.3 per cent. This is better than the numbers published by a group of pathologists and dermatologists, and just below the accuracy of a small number of highly trained specialists. Shi: 'This means that our system outperforms most doctors.' The reason for this is probably that the human eye only takes a relatively small portion of a microscopic slide into account. Meijer: 'Observers get a first impression from this, and then search the slide for confirmation. The AI system analyses the entire slide, which results in a more accurate diagnosis.'

The main advantage of this digital system is that it would be easy to use. Meijer: 'We envisage a system where you upload an image and then get a diagnosis from the AI algorithm.' However, it could also be used to train doctors in recognizing the specific U-serrated pattern of EBA. Although the system worked well in this research project, the results need to be confirmed for a new, larger dataset. For this purpose, a prospective European study has been started. Meijer: 'It will take a year to collect the data of new skin biopsies, which will be able to validate the system. Hopefully, we will then have a quicker and easier way to diagnose EBA and prevent the sometimes debilitating scarring.' 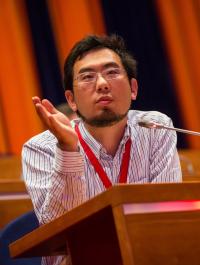