Hydrogen will play a key role in reducing our dependence on fossil fuels. It can be sustainably produced by using solar energy to split water molecules. The resulting clean energy can be stored, used to fuel cars or converted into electricity on demand. But making it reliably on a large scale and at an affordable cost is a challenge for researchers. Efficient solar hydrogen production requires rare and expensive materials - for both the solar cells and the catalyst - in order to collect energy and then convert it.

Scientists at EPFL's Laboratory of Renewable Energy Science and Engineering (LRESE) came up with the idea of concentrating solar irradiation to produce a larger amount of hydrogen over a given area at a lower cost. They developed an enhanced photo-electrochemical system that, when used in conjunction with concentrated solar irradiation and smart thermal management, can turn solar power into hydrogen with a 17% conversion rate and unprecedented power and current density. What's more, their technology is stable and can handle the stochastic dynamics of daily solar irradiation.

The results of their research have just been published in Nature Energy. "In our device, a thin layer of water runs over a solar cell to cool it. The system temperature remains relatively low, allowing the solar cell to deliver better performance," says Saurabh Tembhurne, a co-author of the study. "At the same time, the heat extracted by the water is transferred to catalysts, thereby improving the chemical reaction and increasing the hydrogen production rate," adds Fredy Nandjou, a researcher at the LRESE. Hydrogen production is therefore optimized at each step of the conversion process.

The scientists used the LRESE's unique solar simulator to demonstrate the stable performance of their device. The results from the lab-scale demonstrations were so promising that the device has been upscaled and is now being tested outdoors, on EPFL's Lausanne campus. The research team installed a 7-meter diameter parabolic mirror that concentrates solar irradiation by a factor of 1,000 and drives the device. The first tests are under way.

The scientists estimate that their system can run for over 30,000 hours - or nearly four years - without any part replacements, and up to 20 years if some parts are replaced every four years. Their solar concentrator turns and follows the sun across the sky in order to maximize its yield. Sophia Haussener, the head of the LRESE and the project lead, explains: "In sunny weather, our system can generate up to 1 kilogram of hydrogen per day, which is enough fuel for a hydrogen-powered car to travel 100 to 150 kilometers."

For distributed, large-scale hydrogen generation, several concentrator systems could be used together to produce hydrogen at chemical plants or for hydrogen stations. Tembhurne and Haussener are planning to take their technology from the lab to industry with a spin-off company called SoHHytec.

Thanks to an open interface, it will be possible to monitor the instantaneous performance of the system. 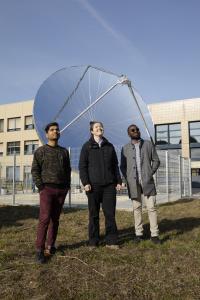