Solar-driven photoelectrochemical (PEC) water splitting is an attractive approach to convert solar energy into chemical energy. Among many photoelectrode materials, crystalline silicon (c-Si) has drawn considerable attention because of its earth abundance, narrow bandgap, and suitable band edge position for hydrogen evolution reaction (HER). However, c-Si suffers from low photovoltage generated from the solid-liquid junction.

Various strategies, such as the construction of p-n homojunctions, metal-insulator-semiconductor (MIS) junctions and p-n heterojunctions, have been adopted to obtain high photovoltage. The MIS junctions have been the focus of attention in PEC water splitting due to their simple fabrication and the potential to achieve higher efficiencies than p-n junctions. However, there are very limited Si-based MIS photocathodes reported with efficiency exceeding 5%, much lower than that of p-n junction photocathode (10%).

One of the major challenges of p-Si MIS photocathodes for higher efficiency is the parasitic light absorption from HER catalysts such as Pt, Ni-Mo, etc. Traditional MIS photocathodes are fabricated from p-Si, where the photogenerated minority carriers (electrons) drive the reduction reaction at the front surface. This could be translated into the fact that the catalyst must be placed at the same side of MIS junction. Thus, the parasitic light absorption from catalysts will severely limit the photocurrent density. The metal layers in MIS junction also cause optical loss. Another limiting factor is the lack of low work function metals to form a large band offset with p-Si in MIS junction, resulting in a low photovoltage.

In a research article published in National Science Review, scientists at Tianjin University present a unique illumination-reaction decoupled MIS photocathode fabricated from n-Si, which surmounts the challenges that seriously impede the development of p-Si MIS photocathode.

Different from previous works that employ minority carriers to drive the surface reduction reaction, the majority carriers (electrons) of n-Si MIS photocathode are used in this work. Upon this simple, unconventional yet effective modification, the MIS junction and catalyst can be placed on the opposite sides of n-Si, which avoids the light-shielding problem of catalyst.

This facile strategy exhibits a potential to inspire the rational design of solar powered photoelectrochemical systems that use catalysts with poor light transmittance, a step forward towards future large-scale commercialization of solar water splitting.

Photocatalytic reaction in the shadow 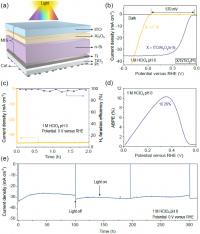